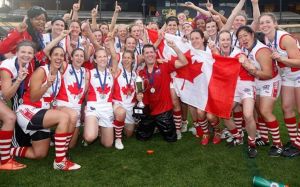 Canada’s national men’s team – the Northwind – has played in all six iterations of the tournament, but will now have to wait at least another year for its shot at an inaugural podium finish.

Canada’s national women’s team – the Northern Lights – has forged a fierce rivalry with Ireland, meeting them in all three of the women’s finals. The waiting will be hard for the Lights, who will be keen to avenge the tight loss in the 2017 final.

World Footy News reported that forecasted restrictions on international travel and the uncertainty around team availability led to the AFL’s decision.