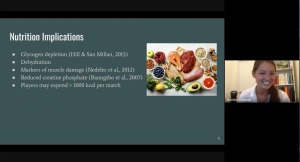 Is there something footy related you’ve always wanted to know more about? Perhaps something related to running your club or something from a performance point of view?

Upon the postponement of regular seasons and the International Cup, AFL Canada set about organising a series of webinars to assist players and club officials with these very queries. And even though some leagues and team trainings were able to resume the virtual learnings have continued.

Those who tuned in were lucky enough to be educated by guest speakers of the very highest calibre, see the full list below.

AFL Canada would like to extend a huge thank you to those who gave up their time to guest host, and those who attended and took part in the webinars series.

If you'd like to learn a bit more about Footy or running a footy club via one of these webinars, recordings are available - reach out to development@aflcanada.com

Thank you again to all guest hosts for giving up their time to help develop footy in Canada.

There are more webinars to come so if you’ve got a topic you’d like added to this list, feel free to email development@aflcanada.com.