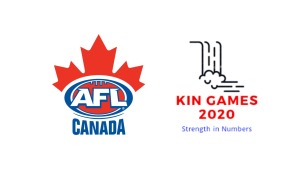 St Catharine's is set to host the largest gathering of university students to play Aussie Rules outside of Australia when more than 500 kinesiology students converge on the city's Brock University.

Aussie Rules will be one of five sports at which students will compete at the Kin Games from March 12-14 - a tournament which pits students from 34 universities against each other in sporting, academic, dance and spirit events.

Kin Games head coordinator Claire Shaw played Aussie Rules when the sport featured at the University of Alberta games in 2018 with 31 schools.

"AFL Canada was involved then and did an amazing job when it came to refereeing, coaching and helping teams understand the game," Claire said.

"When they reached out to me this past fall, I knew we had to have footy at the 2020 Kin Games.

"I think students will enjoy learning a new sport that is fast paced. There are skills involved in footy that will be familiar to the students but will force them to apply those skills in a different way."

"I am one to search out and try new sports any chance I get, so when I heard that we would be playing Aussie Rules in Edmonton I was excited to be learning a new sport," Bradford said.

"The sport was very popular and created a great friendly atmosphere while playing, so I was thrilled to hear that AFL Canada wanted to get involved in Kin Games this year because I remember how amazing the experience was in Edmonton."

Kin Games teams have rosters of 16 per school, with the Aussie Rules games played as nine-a-side with an interchange of five.

AFL Canada development manager Jacob Haeusler said it was an opportunity to introduce the sport to a whole new audience.

"The tournament will include universities from eight provinces, so it's a great chance to show the game to hundreds of students from across the country," Jacob said.

"Hopefully they enjoy Aussie Rules and we even get a few converts to local clubs after the event is finished."