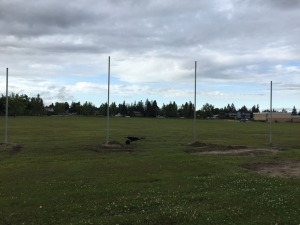 The 180-metre ground located at AE Cross School will become the primary ground for the club's men's and women's teams – as well as the centre for the rapidly expanding junior program.

"Our previous location was squeezed between two rugby fields, so it was only 100 metres wide.

The push for a permanent Calgary oval has spanned half a decade, but original plans slated for the River Valley School near the University of Calgary hit a roadblock.

"After that we changed focus to the new location at AE Cross and have been working through school and city approval for the past two years," Moore said.

"The Calgary Board of Education, AE Cross School and David Kalinowski from the City of Calgary have all been great helping us gain approval for this project."

Moore said the new facility placed the club in a strong position to continue its growth.

"Our senior numbers were higher earlier in the year when we were training and playing at AE Cross," Moore said.

"Our junior program also continues to grow each year. We had over 200 kids in AusKick this past season. We have a full-time schools coach so we are in schools year round now teaching the game.

"AE Cross has had an Australia football module in their PE program for the past five years.

"We hope these permanent goal posts enable them, and other neighbouring schools that have footy in their PE programs, to play inter and intra-school games."