GVL Board Member Recognised in the 2021 Australia Day Awards 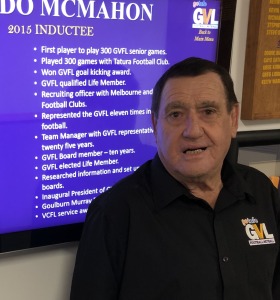 GVL Board Member Recognised in the 2021 Australia Day Awards

The GOTAFE Goulburn Valley League (GVL) Board congratulates fellow Board member Freddo McMahon, who has been awarded an Order of Australia Medal in the Australia Day Honours.

Freddo has been involved with the GVL for over 60 years. He joined the Tatura junior ranks in 1953 as a cheeky, confident rover who was Tatura through and through. He was a fast-elusive player who had uncanny goal kicking ability. He was lucky to play in a premiership team and win the Shepparton Junior League best player award.

He commenced his senior football in 1958 under the coaching of great Keith Warburton. His performances soon caught the eye of VFL talent scouts, and he was invited to trial with both Collingwood and Melbourne.

His love for the Bulldogs saw him stay with Tatura and cement his place in the local team where he became one of the first players selected each week. He was also selected in the GVL representative team on eleven occasions.

Freddo had uncanny goal sense and had trouble hand balling on the forward line. In 1966 he won the GVL goal kicking award and he won his clubs goal kicking award on 8 occasions. He holds an interesting record at Tatura as he was runner up in their best player award fourteen times. He did however win the award in 1966. Freddo established himself as a classy player who really annoyed the opposition team and spectators with his ability to kick goals from all angles. He loved the game and was an integral part of the Tatura club for so many years and captained the Bulldogs for three years.

Freddo became a qualified Life member of the League when he played his 200th game and became the inaugural President of the GVL 200 Club. He also helped form the Tatura Football Club past players association. He was a fitness fanatic which helped him to continue playing the game long enough to become the first player to reach the 300-game milestone in the GVL.

On retirement he immediately became involved in Junior football coaching and for 6 years acted as Country Recruiting Officer for the Melbourne Football Club. This appointment saw him being a part of Junior state and interstate carnival teams including state title wins. He was also a recruiting officer for the Collingwood Football Club for 4 seasons. His love of the GVL saw him become involved with Country Championship games and he has been the team manager of the GVL teams for 20 years.

On a regional level, in 1992, he was appointed as Deputy Director of the Goulburn Murray Regional Football Board and on the retirement of Director Bernie Tobin, Freddo became the Director of Football and held the position until the VCFL changed the regional format. He was awarded the VCFL Service medal and the National Football Council Merit award for service to Australian football.

Freddo has a great love of history and especially the history of the GVL. With Keith Wellman’s support he researched the League history and made a series of honour boards depicting all those involved with GVL awards and representative team support over the years. The boards took pride of place in the GVL office when located in Dunkirk Avenue. The League will be forever grateful for Freddo’s diligence and wonderful work to quantify the GVL’s history.

Freddo was appointed to the GVL Board of directors in 2006 and continues to be a board member today. He urged the GVL to institute a Hall of Fame for the League. This caused the GVL Board to appoint him as the League Director to be the chairman and form a committee to administer the Hall. The organising committee had to ignore the protests of Freddo who was against any recognition, however with his incredible record as a player, team manager, football director, historian and wonderful supporter of the GVL and his unbroken 60 plus years involvement Freddo McMahon justly deserved to be inducted into the GVL Hall of Fame.

The GVL Hall of Fame bestowed the title of “Legend” on Freddo in 2019 for his dedication and sportsmanship during his illustrious football career with the Tatura Football Club and the GVL. Freddo is the third player to become a “Legend” in the Hall of Fame.

Freddo joins Fellow GVL Board Member Mick Williams, who was recognised in 2020, as a recipient of the Order of Australia Medal.

We congratulate Freddo on this well-deserved recognition for his services to Football.