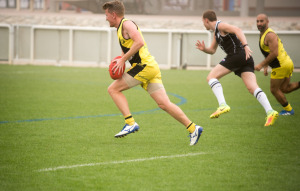 The Dubai Dingoes have pulled off one of the biggest upsets in recent years, surprising almost everyone in the AFL Middle East world. Their victory over competition behemoth, the Dubai Dragons, on Friday was as unexpected as it was exhilarating – especially for the Dingoes.

The club has had a tough time over the past few seasons, being a perennial prey for other teams, secure in the knowledge that at least they’ll get a win against them. How that has now changed. The Dingoes 34-point victory over the Dubai Dragons has made the club believe that they can be a finals candidate again. Other clubs can now wipe away the smug smiles when they play the Dingoes with victory no longer a given.


The win was built on a great first quarter from the Dingoes – keeping the Dragons goalless and racing away to a 28-point lead at the first break. The Dragons rallied in the second quarter with four goals bringing the margin back to 19 points and a shot at a second half revival. But the Dingoes were having none of it, winning both remaining quarters to take out the game and a memorable win.

In the second match of the double-header at Sevens Stadium in Dubai, the Abu Dhabi Falcons were coming in undefeated to try their hand against the reigning premiers. The Bulls also saw this game as a test of where they stand, hoping to reclaim top spot on the ladder and set up favouritism to chase back-to-back flags.

The Bulls got away to a strong start to lead by 23 points. From there they absorbed the pressure applied by the Falcons to extend their lead at every break before running out comfortable 52-point winners.

It sets up one of the most even seasons for quite some time as teams head into their winter breaks. Round 4 will be played on 24th January. At the end of the third round, just a game and percentage separates top from bottom teams. The Bulls and Falcons have two wins apiece whilst the Dragons and Dingoes have a win each.

When competition resumes after the break, the Dingoes can chase another high profile scalp in the Multiplex Bulls. The Abu Dhabi Falcons can almost guarantee finals if they can again down an lout of sorts Dubai Dragons.