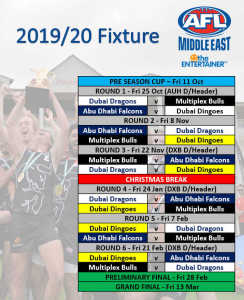 With all AFL Middle East clubs coming to life after their off-season, the excitement and anticipation for the new season is already starting to grow. The release of the 2019/20 season draw last week added to the excitement as teams learned whom they will play, where and when.

Kicking off the challenges of the new season is the Pre-Season Cup, just over six weeks away. Scheduled for Friday 11th October, the day is the perfect chance for teams to dust off the cobwebs with match play and the first silverware of the new season. The venue will be announced shortly.

The opening round is full of excitement, featuring a double-header in Abu Dhabi. The Grand Final rematch between the Multiplex Bulls and the Dubai Dragons. The Bulls will be keen to get their title defence off to s flying start against their archrivals. The Dragons will be hoping to claim a victory and right the ship after losing last year’s final match.

The locals will also be delighted to see their Abu Dhabi Falcons return to the field against the Dubai Dingoes. Both teams will be out to make statements that the era of the Bulls and Dragons is about to be seriously challenged.

Rounds 2 and 5 will see matches shared by Abu Dhabi and Dubai whilst all other rounds will be double headers in Dubai (Rounds 3, 4 and 6).

The season will not feature the Doha Kangaroos or Bahrain Suns as part of the premiership race, but both will be involved in other ways. This starts with both clubs showing the AFL Grand Final live for local fans both as entertainment and as a means of raising awareness for future player recruitment, potential sponsorship or off-field support.

The AFL Middle East have been hinting for some time that there are surprises in store and it will be very interesting to see what those treats are once they are announced.

The Multiplex Bulls will enter the new season as early favourites as reigning premiers. How the Dubai Dragons respond to their Grand Final defeat last season remains to be see, though they will be well and truly ready. The Dubai Dingoes have been advertising heavily to gather recruits and build the club whilst the Abu Dhabi will be keen to take their promising form from recent seasons and turn it into something more substantial.