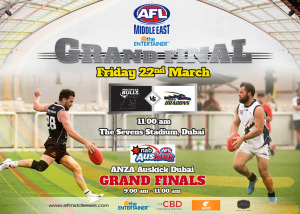 It cannot be understated how important tomorrow’s AFL Middle East grand final is. On the one hand you have an incredible club chasing what would be a seventh flag in eight seasons and a fifth in a row. On the other hand, a club that has performed so well since they first came into the league, but four premiership defeats later are waiting to break a drought.

Sceptics might take the view that another Dragons flag would be fine for them but have a downside to the competition as a whole as other clubs might question their ability to rise and ever challenge them.

But the Multiplex Bulls hold the antidote to a sceptical viewpoint. A Bulls victory will send a clear message to all present and future clubs that things change the Dragons are nothing more or less than a raised bar to be jumped over. The Dragons will not lay down, but the Bulls are ready to bring them down - rise to the challenge.


The Bulls have had success in pre-season tournaments, and have had victories over the Dragons during seasons. But each year they have appeared to be a level below the Dragons.

In Round One, the Dragons held on for a narrow three point win over the Bulls in the season-opening grand final replay. It was a tough game and the Bulls were disappointed to lose, but since then they are undefeated.

They met the Dragons again in Round Five – the statement match – where the winner would be viewed as a flag favourite so close to finals. The Bulls won another tough match by 13 points. They made a statement that they were sick of the Dragons’ dominance.

The Bulls can claim to have been the best team this season. Now they have to go out and prove it. It would be their maiden flag and it would be the competition turning point that proves that any team can build to success.

The Bulls also have the advantage of a longer rest with the Dragons playing last week in the preliminary final. Whether the rested legs help remains to be seen, but history often says that the better rested team runs games out better.