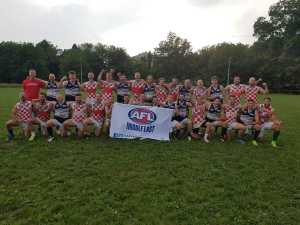 As if taking on their own UAE teams – the Dragons, Bulls and Dingoes – was not challenging enough, the Falcons opted to test their strength on a truly successful championship team. The Croatian Knights finished in first place of their Division Two draw at last year’s International Cup in Melbourne. That is on top of having won the AFL Europe Euro Cup in both 2010 and 2015 as well as having been second three times and third three times since 2008. They are a powerful Australian Football Rules nation.

But the Falcons went, not necessarily to win but for the love of the game and experience – almost like an early pre-season match for the 2018/19 AFL Middle East season.

The Falcons started well, surprising a sluggish Knights team during the opening quarter to take a handy 13-point lead to the first break in a game which later featured showers which would raise the degree of difficulty for both teams.

The second quarter saw the Knights flex their muscle, slamming home six goals to two. Clearly stung into action after an ordinary first quarter, the Knights turned things around to hold a 14-point lead at the main break.

As the rain and lightning arrived for the third quarter, the Knights continued to raise the bar, booting a further for goals to two for the term to move out to a 27-point lead at the final change.

The last quarter saw the Falcons fight like demons, but could not bridge the gap on the Croatian Knights. Rather, the Knights moved into another gear to kick another four goals to one and run away with a commanding 47-point victory by full time.

Falcons President Ty Farrell said "Full credit to the Knights, they had some handy players! Our boys just run out of puff but we enjoyed the experience. Amazing to see they can get 4 mens teams and 4 womens teams full of Croatians!"