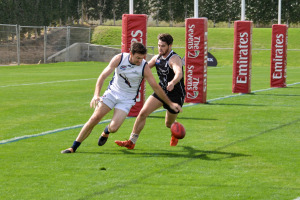 The Australian Football League Middle East was back in action on Friday with a Dubai Double header at The Sevens which saw plenty of goals in two spirited contests.

Played in very still and unseasonably hot weather first up was the much anticipated clash between last year’s Grand Finalists the Multiplex Bulls and Dubai Dragons.

Every year and every match this rivalry goes up another level and Friday’s battle did not disappoint.

The first quarter as usual was tight with both teams forced into errors around the ground but the Dragons took a slight seven point lead into the second quarter.

The Dragons started the second quarter firing and jumped to a five goal lead thanks to Jake Kane and Travis Hayward in the midfield but as they always do the Bulls fought back with two late goals from Ted Stobart and captain Nathan Holly.

It was one way traffic in the third quarter with the Dragons regaining their five goal lead as the tall forward Daniel Gribbin started to find some space.

Bulls full back George Rahhal was sensational all day and managed to keep the Dragons danger forward Ryan Perkins to just one goal.

The last quarter was goal for goal early on but then the Bulls made their usual late charge bringing the game within three goals, however they were beaten by the siren with Dragons winning 17.9.111 to Bulls 14.9.93.

In the later game the Falcons from the capital were convincing winners against the Dubai Dingoes 29.9.153 to 5.6.36 with Zac Moon the star kicking eight goals.

It has been a season to forget for the Dingoes but they are confident they will bounce back in 2018/19 with a strong summer of recruiting.

The final home and away games take place on Friday March 2. The Dubai Dragons will travel down to Abu Dhabi to take on the Falcons while the Dingoes will host the Bulls in Dubai.

This final round will lead into the Grand Final on March 16 out at The Sevens Stadium, which is set to be a repeat of last year’s decider: another epic encounter between the Bulls and Dragons.