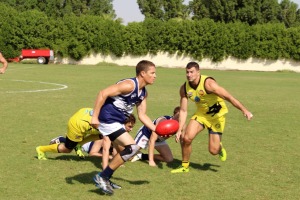 AFL Middle East returns this weekend as Round 3 kicks off with two enticing fixtures.

In the match of the round on Friday afternoon at the Sevens Stadium, last year’s runners up Multiplex Bulls face the in form Abu Dhabi Falcons. Kick off is at 16:00.

It’s a huge game in context of both teams’ season as they currently sit tied second on the table, with one win and one loss. Both of those losses came against the reigning premiers – Dubai Dragons. The Bulls lost by nine points in Round 2 while the Falcons succumbed by 29 points in the season opener.

A loss for either team will see the advantage go to their rival and put a lot of pressure on the losing side to have a big 2018 when matches return in January.

The Bulls will look to full forward Jon Hickey, returning after missing the Dragons game, to keep the scoreboard moving while full back George Rahhal will be tasked with keeping the Falcons quiet.

In the centre of the ground versatile Falcons’ midfielder Zac Moon is sure to be full of running. Moon and the Falcons will hope to carry on their good form after an impressive 116-73 win over the Dingoes
three weeks ago.

In the other Round 3 match tonight Dubai’s old rivals, the Dingoes and the Dragons, meet under lights at Dubai Sports City Rugby Park, with the bounce at 20:30.

The Dragons look to carry on their fine run of form after wins over both the Bulls and the Falcons to make it three from three, while the Dingoes are hoping to notch up their first win of the season.

Thanks to Alex Broun from Sport360 for the article.