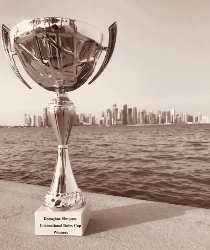 Recently, it was reported of the decision that would see the Doha Kangaroos in Qatar stand down from fielding a team in the AFL Middle East competition for the current 2017/18 season. Their intention was to ride out the current travel restrictions between some Middle East nations and return to the league when travel became less difficult.

To ensure the teams stay fit and remain together, both the Doha Kangaroos (AFL) and the Qatar GAA (Gaelic Football) teams have come together in a unifying tournament with a view to their respective league returns.

The Doha Kangaroos state that:

“With both sides being unable to compete in their respective Middle East Leagues due to the current travel restrictions, the Doha Kangaroos (AFL) and the Qatar GAA (Gaelic Football) have joined forces and will play in a local AFL tournament tomorrow.”

“Four teams comprising of a mix of players from both codes will compete for the Donoghue-Simpson Cup at the Doha Rugby Club.”

“The cup has been named in honour of Ben Simpson and Tom Donoghue, who both played in the Doha Kangaroos 2014 premiership side as well as for the Qatar GAA.

According to the Qatar GAA site, the matches will be played under International Rules, but using an oval ball, which the GAA players were spending time coming to terms with.

Not only is the event good news for the teams involved, it is also great news for the AFL and GAA leagues to know that the two teams plan to remain very active this season in a bid to remain match ready for their respective returns to their league rosters.