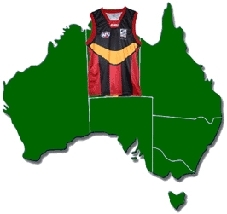 WINNING exhibition games in February isn't everything, but the nature of the AFL Indigenous All-Stars' 50-point loss to Essendon in Darwin two weeks ago was disappointing.

In comparison to the Bombers, the All-Stars' lack of height was pronounced. Mismatches in key areas -- Antoni Grover in the ruck against David Hille, Shaun Burgoyne opposed to Dustin Fletcher at centre half-forward, to cite just two examples -- put the Indigenous side on the back foot from the start.

The drubbing has, however, brought into focus a noticeable trend that's developed over the past five years: that All-Stars sides have tended to be top-heavy with Northern Territory footballers, specifically those from outside the AFL selected on the periphery as either late-inclusion 'top-ups' and/or emergencies.

The All-Stars' cause wasn't helped when key trio Adam Goodes, Michael O'Loughlin and Lance 'Buddy' Franklin were ruled out just four days before the big game. (Their omissions came about after their clubs either fibbed to All-Stars coach Michael McLean and selectors as to their player's availability or after imposing ridiculous restrictions on the amount of game time allowed, such as playing for just five minutes per quarter.)

But late and unexpected withdrawals in football happens all the time. What was needed in Darwin, therefore, were contingency plans to anticipate and off-set such withdrawals.

To illustrate the central point of this argument, in 1994 against Collingwood, there were 16 footballers from outside the AFL in the All-Stars side. Six of those came from outside the NT -- Shane Tongerie (Central Districts, SANFL), Wayne Hogan (Tasmania), Joe Smith, Clinton Wolf (Claremont, WAFL), Shane Cable (Perth, WAFL) and David Skuta (ACT) -- while eight players came from within the NTFL.

In contrast, only oneplayer from outside the AFL -- from the SANFL -- featured in either of the 2003, 2005 and 2007 All-Stars teams. In that same period, however, eight NTFL players without AFL experience were drafted into those sides as late inclusions.

There are two key areas where NTFL footballers have an advantage over their southern counterparts when it comes to the All-Stars: (1) They are in season (October through to March) and (2) they are usually just a quick drive down the road away from Marrara for a chat with selectors. Consideration must also be given to the selection panel, who generally have to work within tight financial and time constraints when picking the side, thus preventing their ability to cast their nets far and wide when key players drop out.

But to be a fully representative Indigenous Australian side, which is what the initial concept was all about, there are and were a number of players selectors could have looked at at any stage of the past five years to fill the breach, be they from WA, SA, Victoria or, of late, Far North Queensland.

The point is, there are loads of Indigenous footballers outside the Northern Territory who are more than capable of playing a bit role in an AFL exhibition match in February.

The NT has produced some of the most exciting talent in the history of the game -- I am a massive fan. Darwin is the All-Stars game's 'spiritual' home -- and may that forever remain. But the All-Stars concept is not a NT one. The original idea for the now-biennial game came about when a Nyoongar footballer was racially abused at a suburban ground in Melbourne.

The idea for the game to be played in Darwin was because that city is the most cosmopolitan in the country, providing a perfect and symbolic backdrop for an exhibition of the game's black magicians.

To avoid a potential 'disengagement' from Aboriginal footy fans, however, and as far as it is practically possible, the AFL Indigenous All-Stars should be fully representative of Indigenous Australia. Failing that, the other option is to make the side an AFL-specific one only.