Did our boys cause series cancellation? 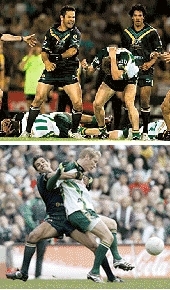 THE Gaelic Athletic Association's (GAA) stunning decision last month to pull out of this year's International Rules series has come about over its concerns by the 'thuggish' display by the Australians in Ireland in October and November last year.

The move has clouded the series' future in the only game AFL footballers can represent their country in. The GAA's decision comes after the two Test matches in Melbourne in 2005 and in Dublin in November last year.

The flashpoint of the Test in Dublin came in the first quarter when emerging midfielder and 2006 NAB Rising Star Pearce laid a regulation tackle on Irish hard man Graham Geraghty. Not used to tackling (it's not a feature of Gaelic football but is always a feature of the IR Series), Geraghty failed to brace himself for the impact with the ground and was knocked unconscious for a few minutes. He later recovered fine and bears no ill will towards young Pearce.

Ireland coach Sean Boylan was livid. He threatened to call off the game but it was his player's insistence to play on which saved the day from becoming a total farce. Australia went on to win the game by enough aggregate points to retain the Cormac McAnallen Cup.

The Irish were incensed a year earlier when Brisbane and Indigenous Team of the Century defender Johnson felled three Irish players in the Second Test in Melbourne.

Johnson, looking to tackle an on-coming Ireland player, was wrong-footed and, as he reached to grab him, collected him clothes-line style. An Irish team-mate rushed in to remonstrate with Johnson but he hit the deck with little more than a protective shove. Another team-mate came in to remonstrate also but he was met with a Johnno special; a round-house right and left combination that didn't quite connect but enough for him to fall over.

Johnson, who later apologised unreservedly for his brain snap, was subsequently given a five-match ban from the series -- effectively ending his representative career. (He also received some thoughtful hate mail.)

So did these acts caused the cancellation of professional footy's only international outlet? On the surface, it does seem that way, but in reality, no. The two incidents were merely 'flashpoints' or 'lightning rods' which have given the Irish reason to back away from the series while they work what to do next. You see, there are other deep-seated issues here, primarily concerning the Irish. Tackling is a big issue with the Ireland camp. Our players are trained professionals and tackling is fundamental to our game.

While not an official stance from the GAA, there is word that some quarters in Ireland want tackling outlawed altogether when/if the series returns. Their players are part-timers and receive little if any recompense when injured playing these games. They are also generally not big and muscular, further exacerbating the pain when tackled by the Aussies.

Another bone of contention is that the GAA has expressed concern that AFL clubs are actively recruiting teenage Gaelic footballers, effectively draining its shallow pool of player talent. At least three AFL clubs this year have between them five Irish teenagers on their international rookie lists. And the money on offer with an AFL career is way above anything that an amateur Gaelic football career can offer financially its youngsters.

Resolve these issues and we may find some common ground, the GAA is, in effect, telling us. Until then, the IR Series faces an uncertain future.

And State of Origin? In 2008, Australian Football will celebrate its 150th year. There is speculation that AFL State of Origin could make a special return, although nothing specific or official has come from AFL House on the subject.

With no International Rules this year, and our game's 150th coming next year, maybe the timing could be right for the concept's return? It's been eight years this year since we last saw the best of the best turn out for the Big V, the Black Swans or the Croweaters.

Whatever eventuates, Indigenous footy yet again finds itself not that far from centre stage.