MSBL Player of the Week - Rnd 8 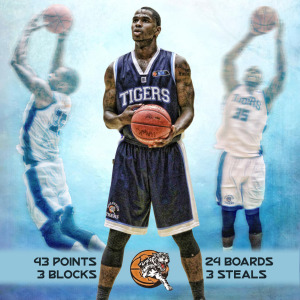 THE Week Eight Men’s SBL Player of the Week has been awarded to Ray Turner of The Local Shack Willetton Tigers.

Arguably the game of the season thus far, Saturday night saw the Willetton Tigers sneak past the Cockburn Cougars in a double overtime thriller, with two of the league’s best centres in Jaylen Billups and Ray Turner going head to head all game.

The Tigers wrestled control early, leading at the main break by 10 before the Cougars continued to narrow the gap with Gavin Field tying up the game late to send it into overtime 94 a piece.

The Cougars took the lead 109-105 in the second OT before three consecutive baskets by ex-Cougar Damien Scott gave the Tigers the edge.

The Cougars levelled the scores multiple times again before Ray Turner scored the eventual game winner with 8 seconds left on the clock to seal the victory for the Tigers 118 to 120.

Turner finished with an astonishing 43 points, 24 rebounds, 3 steals and 3 blocks in an exceptional performance for the visiting side.

The Willetton Tigers now hold a record of 9 wins and 2 losses, comfortably sitting inside the top four with a trip to Kalgoorlie ahead of them this weekend to take on the resurgent Goldfields Giants at Neils Hansen Stadium.