WOMEN'S DIVISION ONE REVIEW - ROUND 4 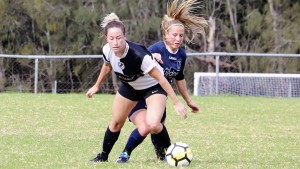 Results from Round 4 of the Builders Club Women’s Division 1 have left the ladder with two groups: one fighting for places in the end-of-season finals; the other in a battle to avoid the basement. There’s still a long way to go but the four winning teams this weekend now fill the top four spots and have pulled four points clear of the rest.

By coincidence, the top four now play each other in Round 5, leaving the bottom four desperate for a chance to pick up points against other strugglers. The stage is set for a fascinating Round 5.

Just three players have now scored in every round this season: Uni’s Kristen Gorgieski and Albion Park’s Casey-Leigh Suttle and Rylee McGartland.

Last season’s champions stepped up a gear this weekend to thrash Thirroul 9-0. The battle for top scorer also got fiercer as it was Casey-Leigh Suttle’s turn for a hat-trick, taking her tally for 2018 to eight goals, while Rylee McGartland struck her seventh. There was a brace apiece also for Renee Crowe, who has seen her name on the scoresheet almost as often as the headline strikers in this outfit, and for Liandra Gaykamangu. The other goal came from Nicole Mccracken.

Albion Park coach Richard Davis was especially pleased to see youngsters Renee Crowe and Rylee McGartland getting among the goals as these two have come up through the juniors and are showing their talent now at this level. He was non-committal on his side’s prospects for 2018, though, saying they keep a level head and take each game at a time, but ‘they’re playing good football and with a nice mix of experience and youth making it an exciting team to watch’.

Next up for Albion Park is a visit to Koolobong Oval to take on a lively University eleven. Thirroul travel to Fernhill next for what could be a tight tussle against the bottom side.

The Quarriers bounced back from their disappointing defeat to Thirroul to claim an emphatic 3-0 win against bottom of the ladder Fernhill. Top scorer Katie French notched her fourth of the campaign, and she was joined on the scoresheet by Caitlin Cardwell and Sara Saliba.

Kiama coach Umberto Sorrentino said: “This was exactly the response I was looking for after last week. This was a great all round effort and we converted the good chances we created”. Sorrentino picked out Josie Iorianni who moved to midfield for this fixture: “She was strong in the air, never stopped tackling and delivered a strong overall performance”.

Kiama hosts Woonona next Sunday in a fixture that could go either way. Fernhill will be looking for its first points at home to Thirroul.

Georgina McDonnell grabbed a brace as University continued to average almost four goals a game in an exciting 2018 campaign. Kristen Gorgieski scored her sixth of the season, with the other strike from captain Elise Battin.

The win leaves Uni third in the ladder and only three points adrift of next week’s opponent Albion Park. Uni coach Brod Crighton was pleased to see four goals go in again, but “disappointing to see so many other opportunities wasted. We are still developing as a squad and the football we’re playing is pretty to watch and improving each week”. He also had positive words for Balgownie, who “played well, never gave up and made it difficult for us to break them down”.

Balgownie coach Earle Canvin acknowledged that University were just too strong on the day, though his girls battled to the end and earned a late consolation goal. “After a tight start, a few errors saw Uni grab three goals just before half time”, effectively killing the game by the break.

Russell Vale are up next for the Rangers, while it will be interesting to see if the free-scoring Uni girls can be the first to pierce the Albion Park defence next weekend.

Woonona remained unbeaten in 2018 and kept within two points of the leaders with this clinical 3-0 win over Russell Black. And Mick Sutton’s team managed this without prolific goal scorer Sinead Bailey. On the scoresheet this weekend were Hannah Broadhead, Kate Stewart and Fiona Leafe. This was Leafe’s first goal at this level after scoring freely in under 18s and under 16s, so there’s a name to watch for Woonona.

For Sutton, this was his side’s “best game so far, creating some great opportunities from sharp ball movement across the park stretching Russell Vale’s defence”. And looking ahead to next weekend’s crunch game against Kiama, Sutton added: “It will be a tough game against a side showing some good early form, but I know the girls will be up for the challenge.”

After two difficult ties against the top two teams, Russell Vale will be hoping to get their season back on track against Balgownie in Round 5.