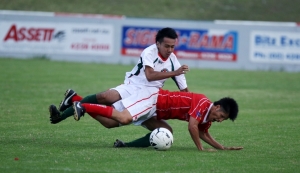 Local supporters were treated to an entertaining derby, played between Bellambi FC and Fernhill FC on Saturday afternoon.

Bellambi have been struggling so far this season without a win, but showed enough spirit for the encounter with Fernhill, to possibly pull out a draw, but went down 2-1 for their seventh loss in a row. Much of the game was played in Bellambi’s own half, with Fernhill squandering half chances.

The first half was dominated by Fernhill, with four shots on target within the first ten minutes with Bellambi keeper Jason Petty pulling off fine saves.

Fernhill’s Marc Sergi had two strikes within the first four minutes from outside the box on target, the second one brilliantly saved to his left by Petty.

Fernhill attacked on both flanks. A good run from Sean Poulton on the right side, cutting in and beating two defenders, almost eventuating in a goal, but was well blocked by Bellambi’s Mattias Passlack, before reaching the intended target.

Bellambi had the occasional counter attack and in the 19th minute, Bellambi attacker was fouled outside the box on the left side.

A minute later, Bellambi striker Daniel Pivovarski lined up for the set piece, taking the shot beating the wall – defenders, attackers and goal keeper to eventually hit the back of the net, surprising everyone. This gave Bellambi a 1-0 lead.

Bellambi seemed to have picked up their game from that goal, playing confidently. Fernhill seemed to have lost their way after the goal, having dominating the game to that point. In the last few minutes of the first half, Fernhill picked up the pace once again, winning a series of corners, with keeper Jason Petty tapping over three corners in a row that were heading towards the goal. Fernhill finished the half how they started, on the attack.

From the re-start, Fernhill attacked as they finished the first half.

In the 47th minute, a challenge on Bellambi’s Mahiro Hasegawa by Fernhill player, resulting in Hasegawa having to leave the field, being replaced with Hal Naganuma.

Immediately following the substitution, after Fernhill’s incursion through the middle, Fernhill’s Chris Hobbs scored, after a scramble between defence and attack, with Hobbs putting the ball into the low right corner, past the keeper levelling the scores.

Mid way through the second half and Bellambi were on the back foot, with the occasional fruitless counter attack without any conviction.