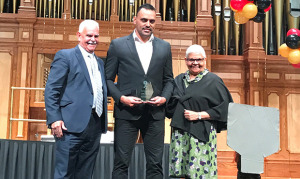 Congratulations to Woodville's very own Paul "Reggie" Vandenbergh for yet another acolade for his work in the community and is work with Aboriginal programs.
PORT ADELAIDE’S director of Aboriginal programs Paul Vandenbergh has been named South Australia’s NAIDOC Person of the Year at a ceremony at Town Hall.
Mr Vandenbergh was recognised along with Port Adelaide reserves footballer Kyran Dixon, who was named NAIDOC Young Person of the Year.
Port Adelaide’s Aboriginal programs have been led by Mr Vandenbergh for almost a decade, and his work in developing the club’s nationally-recognised Aboriginal Power Cup, WillPOWER program, Aboriginal AFL Academy and Cultural Awareness Workshops plays a valuable role in the life and culture of the club.
Port Adelaide chief executive Keith Thomas praised both of the club’s award recipients for their achievements.
“Pauly does incredibly important work for Port Adelaide and the Aboriginal community in South Australia and the Northern Territrory,” Mr Thomas said.
“Under his leadership we have seen some incredible progress made through retaining Aboriginal students at schools that participate in the Aboriginal Power Cup and WillPOWER.
“This award is a credit to his tireless efforts to foster reconciliation and help bring about meaningful change in the lives of young Aboriginal Australians.
“Kyran’s recognition is an amazing testament to the work he has done to overcome his personal battle with cancer and achieve great things.
“He recently completed his university studies and now works for Ersnt and Young – his example is a significant one for any young Aboriginal person aspiring to achieve for themselves.”