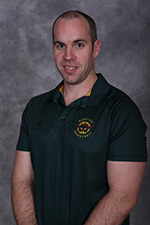 Woodville District Basketball Club would like to congratulate Adam Murphy on his appointment to the role of Head Strength and Conditioning coach of the Adelaide 36ers.

Adam Murphy a previous Woodville District Basketball Club junior, came back to the club to coach approximately 3 years ago.

Adam Murphy has most recently been the assistant coach to the Woodville Men's Premier League team 2015 and 2016 and he has worked on the fitness of our Premier League Men and Women throughout his time at Woodville as well as being a board member for a short period of time in 2015.

Adam Murphy's passion, hard work and dedication for his line of work has lead to this opportunity. It is great to see him rewarded.

Adam will be continuing in his assistant coaching role with the Premier League men, however may miss a few weeks as he will travel to America for the NBA summer league and may have various other duties as the Adelaide 36ers pre-season ramps up.

We wish Adam all the very best in his new role and are proud of what Adam has acheived.