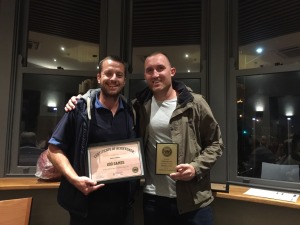 The club would like to congratulate Adam Miller of his acheivement of playing 200 Premier league games for the Warriors!

On Wednesday night at the clubs monthly get together at The Woodville Hotel, ex captain and Warrior legend Cameron Wilson presented Adam with a plaque in recognition of this great acheivement. Adam is a passionate Warrior that #Bleedsgreen, while being a true leader of the men's team, regarded highly by his peers and is in rare company as on of the few players with 2 championships with the Warriors (2005 & 2014).