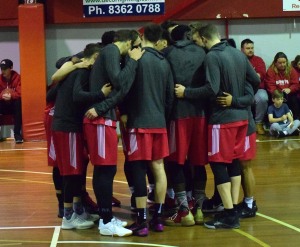 In a very disappointing end to what has been an excellent season, the PL Men lost to Norwood on Saturday night despite an amazing start where we led by 21 points at the first break and everything was going our way!! We eventually lost by 3 points despite several opportunities to send it to overtime as the clock ticked down.

The game started at an amazing pace with Jack (5 points), Darcy (5 points) and Alex (4 points) all scoring, who along with Tobias and BJ dominated most statistical categories. Norwood were a little shell-shocked at 14-6, then an Alex dunk saw them call an early time out to try to wrest the momentum back. It made no difference however, with Jack and Alex scoring again then Nick Marshall chimed in with 2 points of his own and it was 24-8. By the time the whistle blew for the first break it was 32-11 and it appeared that we were in for a good night.

However, as has been the case several times this year, when things are looking particularly good, we have a patch where we have a scoring drought and the 2nd was it. Norwood adjusted, applied some defensive pressure of their own and restricted the Boys to just 16 points whilst managing to score 35 themselves!! At the half way mark of the quarter we were still 15 up 38-23, but scoring was proving difficult with little flow to our offence and Norwood were staring to string together some good defensive patches, helped by some unnecessary turnovers (6 for the quarter compared to just 1 in the 1st). At half time the margin was just 2 (48-46), with Norwood now holding sway.

The 3rd was a dour affair with both teams really knuckling down in defence and trying to slow the other down, which proved successful. Neither really got much offence flowing reflected in the score of just 19-13, which never the less gave us some optimism with an 8 point lead going into the last. Statistically Alex was having an amazing game with 24 points, 15 rebounds, 3 assists, 4 steals and a blocked shot up to three quarter time!!

The last was one of those situations where things happened in front of our eyes but nothing we did seemed to stop the inevitable. Norwood scored the first 9 points quickly, led by a point and again had all the momentum going their way. Both teams then searched for an advantage, which saw the lead change several times and a tie at the 5 minute mark (76-76) following a “best of season” dunk from Alex Starling. Despite a basket from Jack, three bad turnovers in a row cost us dearly giving Norwood the opportunity to score which they took gladly and it was 78-86 with just 1 minute 30 seconds to go. Some excellent defence then saw us get it back to 84-86, still 38 seconds on the clock and an opportunity to take the game after the trials and tribulations of the last couple of quarters, but to no avail. The extra pressure saw a couple of fouls given and Norwood sealed it at the line 84-87.

A very, very disappointing result given the winning streak ended just last week. The Boys were shattered in the change room but Coach Hawkes spoke honestly and rationally and challenged everyone to come back bigger and better next year.

Again, a very disappointing end to what promised to be a great season, we just couldn’t get it done when it counted most. The Boys are feeling it today.
On a positive note, Lightsview is just around the corner, so something to look forward to. The PL Boys will be back in official pre-season training just before Xmas and it will all start again. Good luck to the teams left in the finals, the Grand Final is Saturday the 17th of August at Titanium of you are looking to go.

And thank you to anyone who “liked” these posts, (and Phil for taking almost all the photos), we hope they gave you some insight to what goes on at PL level. Based on feedback they will or will not) continue next year.