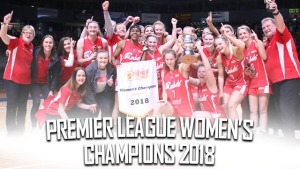 Well, sadly, it appears that it is finally over!!! Jo has bowed out of Premier League after what was an amazing career in basketball. A fantastic player who ALWAYS gave her all when playing for North and play for North she did. Somehow she found a way to don the red & white more than 300 times during what always was a very busy schedule.

Jo you have been an inspiration to many and a joy to watch week after week. There is no doubt kids are playing today because of you. On behalf of every single North Adelaide player, Coach and member, thank you again for your efforts over many years. Enjoy "retirement" (you will see that Jo's definition of retirement is different from most) and we will see you at games no doubt.

There's not enough space to list all of her achievements here, so again I thought I would get Jo to answer some standard questions about her life in basketball - ENJOY.

Well I actually retired in 2016 but knew I still had the hunger for it, I wasn't retiring for the right reasons. Brenton spoke to me but didn't push it and waited for me to let him know. I guess after the 2017 Grand Final it wasn't a nice experience, not because we lost but the way Southern spectators held themselves, and that was disappointing and upsetting. I'm not sure what I did to be booed every time I touched the ball, it's something I've never had to deal with before.

Once the season was over, the next thing for me to focus on was playing my first season of football with the Norwood Football Club. I was looking forward to that even though I was nervous and little bit scared, but as far as Basketball was concerned I was still up in the air for the 2018 season, once again I thought if I decided to play at least I'd be fit from footy. I did decide to play, but early in the season I knew it was going to be the last as I was sick and tired of the spectators saying stuff from the sidelines, but what an ending we went 20-0, won the Grand Final and then to top it off I was awarded MVP for the game couldn't have scripted it any better.

When did you first play for NABC, what year, what age group, who was your coach?

1989, I was 15 and I was asked by Leanne Zacharko (née Perkins) when we were competing against each other at school sports day and I said sure Mum and Dad said I could get into another sport... by the way I was already doing athletics, netball, softball. I had never played basketball, and started in U16's part way through the year. My first coach was Lee Prettejohn.

First year you played Premier League (ABA) and what are your memories of that first year?

Can you nominate one overall highlight?

I would have to say the overall highlight would have to be the 2018 Grand Final win because we went undefeated all season, won the Grand Final and I was awarded the Grand Final MVP made even more special that most of my family were there and I know my dad was watching on from above, he passed away about 6 weeks before, at the end of the game I looked up to him and gave him a kiss, he would've been watching and telling everyone "that's my baby"....

Not going to ask you for your favourite coach, but who have you most enjoyed working with?

Lee was my first coach and I thank him for a lot because if it wasn't for him I wouldn't be playing as I hurt my ankle and was out for 12 weeks and hated the game. I wasn't at training one day and he rang, spoke to me I said I hated it and didn't want to play anymore, he asked mum to bring me to Hillcrest where he chatted to me and I haven't looked back. I thank Lee for having faith and believing in me to one day to become something and I proved that.
Dean Kinsman was another one of my early coaches that helped me a lot. I have had a number of coaches over the years and they all have taught me something different so they have all been influential.

What and who will you miss most?

At the moment I'm not missing it but I think that is also because it was a fairytale ending and I couldn't have asked for it to end any better. I'll miss the team side of things and the girls.

Any thoughts on Coaching?

I'm currently doing indies/small group work and enjoying working on the skill side of things with the kids. I'm not sure if coaching is something I want to get into but I consider being assistant coach (sometime down the track) as it's not as much pressure....

What are you looking forward to the most in the next 12 months?

Playing footy, I am really enjoying it and just wish I was a little younger but not doing too bad for an old lady....travelling with my partner Jodie as we just bought a camper van recently....Thelma and Louise...but don't worry we won't do what they did....

I would just like to thank everyone who I have crossed paths with over the years, family, coaches, supporters, club people, players and anyone else. Words can't describe how thankful I am.

My overall highlight would have to be winning a silver medal at the 2000 Olympics, being in my home country but also being able to have some of my family watching me.

What has being an elite athlete has meant to you over the years?

Being an elite has its highs and lows, the sacrifices you have to make and miss out on family events, friends parties etc is tough but when you have a dream and aspire to be better and want to make the ultimate "Olympics" that's what you need to do, but with highs you have lows that being missing out on being selected for teams etc.

If you had one piece of advice for a young player, what would it be?

"Make the most of every opportunity you are given", especially if you are a bench player, be the player who is always up encouraging, swinging the towel, not questioning why they aren't playing, doing extra work to become a better player, good attitude, not too worried about scoring, happy to do the little things.

Thank you Jo, a true Champion on and off the court.