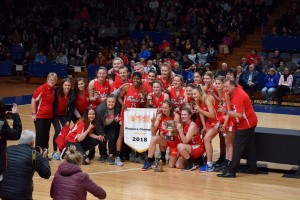 Congratulations to our Premier League Women who won their 21st Premiership on Saturday night defeating a determined Forestville 79-61 in what was a closely fought encounter.

With just 4 minutes and 38 seconds on the clock, the difference was just 1 point (62-61) and momentum had shifted to Forestville given they had scored 6 points in a row, to get themselves within a basket. But just as you would expect, a Championship team steps up when they are challenged and the Rockets Women went on a 17-0 run off the back of relentless defensive pressure, forcing Forestville to miss all seven shots they took, whilst making six of seven field goals attempts and five of five free throws themselves. The final 18 point margin allowed the Ladies and the massive crowd to enjoy the last 90 seconds of not just the Grand Final but also Rocket Champion, Jo Hill’s, last Premier League game.

And what a game it was. Jo was inspirational adding 11 of her 29 points in the last (game on the line) 4 minutes 38 seconds and her emotional response to the game was evidence of what it all meant to her. There will be plenty more said about Jo but for now, CONGRATULATIONS, you are an inspiration to more than you will ever know and you will obviously be missed.

But, like all Premiership wins, this was a massive team effort with contributions from every single player. Statistical leaders were – the amazing Jo who led the way with 29 points (at 55%), 11 rebounds, 2 assists, 3 steals and a block; Leah who continued her amazing year and came within a whisker of a “triple-double” with 14 points, 9 rebounds, 9 assists and 4 steals; Tayla who played a great game on the Forestville “bigs” and was a massive presence in the defensive keyway, finishing with 14 points, 8 rebounds and 2 blocks; Kirsty whose efforts were as usual, “off the scale” playing her normal Captain’s game with 12 points, 5 rebounds, 3 assists and 2 steals; Sam who efficiently did whatever the team needed and had 4 points, 4 rebounds, 3 assists, 2 steals and a block; Lauren who controlled the pace of the game, applied constant defensive pressure and did what she needed to, to finish with 3 rebounds, 3 assists, 3 steals and a block; Sophie who provided a spark off the bench contributing 6 points, 1 rebound and 2 assists.

The after match event is also worth a mention. The Rockets’ family certainly played its part with a massive crowd attending, dressed in Red & White, cheering the Ladies to their win and helping them celebrate after the game. Thank you to everyone who attended.

So that’s it for the Premier League for now. We will look to get a final report from both Senior Coaches to wrap the season up, we hope everyone enjoyed it and look forward to seeing you again in 2019.