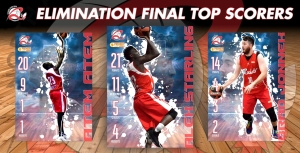 In what was an excellent spectacle for the large crowd, the North Adelaide Men’s Premier League team went down to Forestville, 80-86, ending their recent run of good results, in a tight tussle that went to overtime, to see them complete their season for 2018. Despite holding a 9 point lead with just 1 minute and 55 seconds to go in regulation time, the Boys just couldn’t hold on, allowing Forestville’s more experienced campaigners to tie the game up and close it out in the extra five minutes.

It would be an understatement to say the Boys were prepared for Saturday’s encounter with precise plans laid as to how to deal with Forestville’s NBL players, which worked for large portions of the contest. Sure enough we got off to a good start with Adam, Alex, CJ, Brad and Atem switched on from the first tip. Early shots didn’t drop, but the Boys were active, aggressive and looking to run at every opportunity. Atem in particular started well with a corner “3” (off a Brad assist), followed by an excellent offensive rebound which resulted in an Alex layup. Adam then got involved, crashing the offensive boards and getting the put-back for 2 and it was 7-4. Brad again got involved with a nice assist for an Alex two pointer, then Alex repaid Atem with a nice pass for 2 of his own. Alex scored again, and things were looking good at 13-10, especially given our team defence was certainly having an effect, before Atem finished his quarter with another basket, (giving him 7 points in total), this time off an Adam assist. Forestville managed to tie the scores at 15-15, then in the last 35 seconds scored twice following a couple of long misses from the Boys and the quarter was over in what seemed to be record time with a 4 point deficit (15-19)!! The score certainly didn’t seem to reflect the play, but to be fair we did shoot a little too often from the 3 point line and the return was just 1 of 9. On the other side, our 6 assists from 7 made baskets was a good indicator of the team play.

The Boys started the 2nd full of run and outscored Forestville 9-2 in the first three minutes. Darcy provided some spark off the bench, passing to Brad for a long 3, then scoring a 3 himself, with Alex adding a layup and Nick connecting of 1 of 2 free throws. At 24-21 momentum was with us but to their absolute credit and an indicator of their experience, Forestville made sure it never got of hand, keeping the scoreboard ticking over themselves and staying in touch. Darcy’s influence continued again providing Brad with the opportunity for a 3 before stealing the ball off an under pressure Forestville guard. Brad hit his third 3 for the quarter, after Alex and Atem had scored again with Alex’s being a nice dunk off a steal!! A dunk from Atem, preceded another steal from Alex and the resultant 2 from Brad made the margin 11 (38-27) to complete a 23-8 run and things were looking good. But as is often the case, we missed the next five shots taken, once again allowing Forestville to maintain the faith and allowing them to score 3 baskets making the margin just 5, before Coach Hawkes had to call a time out (38-33). Alex managed to score a layup off a couple of nice passes with Forestville replying with seconds on the clock to make it 40-35 at the long break.

The 3rd was close and tight, reflected in the three quarter time score being tied at 55-55. It started with a Nick Marshall 3, from the corner off an Alex assist and an 8 point margin, but Forestville replied with a 2 of their own. CJ scored, again Forestville responded, then an Alex dunk off his own offensive rebound, along with a couple of made free throws and the margin was 9 again with the quarter exactly half way done. Forestville’s shooters were keeping them in it, hitting a couple of long shots, and getting it back to just 4, (54-50) despite a 3 from Alex and a successful free throw from Atem. We went zero from five for the last couple of minutes, with the only return coming from one made free throw from Alex, whilst Forestville again enjoyed a bright period, allowing them to tie the score at 55. It was set for a big last quarter.

The last was even more exciting (from a crowd perspective) than the third. Again the Boys got off to a great start, scoring the first 5 points, Atem making a long 3 and CJ a nice jump shot and it was 60-55. Forestville responded with a long 3 of their own. Brad Jonnek then hit his fourth 3 for the game before Atem stepped up with a 2, and it was 67-60, and once again we had the momentum all going our way. At 69-60 and exactly three minutes on the clock, Atem picked up his 4th foul forcing Coach Hawkes to call a time out to refocus the group. Unfortunately the Boys missed their next couple of shots, and Atem picked up his 5th and last foul forcing him to the bench after what had been a very solid night for him (20 points and 9 rebounds). The score was still 69-60 but with just 1 minute 55 seconds left to go. Atem’s absence hurt us with Forestville scoring the next 6 points making the margin just 3 before Nick scored a tough layup, with 48 seconds left, but he missed the “and one” free throw to leave it at 71-66. Forestville made a layup, CJ did the same and with just 22 seconds to go it was 73-68 and the game seemingly over?? But Forestville resisted, securing an offensive rebound, and scoring a “2” with 10 seconds left and the score 73-70, with a time out called. Unbelievably the inbound pass was “turned over” and Forestville scored again, 1 point the difference with 7 seconds, before Nick was fouled, scored on the second free throw and we were two up (74-72) with four seconds to go!! Again Forestville called time out and ran the last play to perfection scoring a second before the buzzer sounded, scores tied!! We certainly had our chances but 1 of 7 from the free throw line for the quarter didn’t help.

The overtime period came down to who made their shots. Unfortunately we went 2 of 13 (and 0 of 9 from “3” point territory), whereas Forestville went 4 of 5 from the field and secured a hard fought 6 point win to move to the next round.

A tough night for the Boys after having played so well for three and a half quarters and arguably a premature end to what has been a season where they got better and better as they went.

So that’s it, it finished sooner than expected, but now we can all focus our energies on the Women, this week in the top semi!! Go Rockets.