ROCKET MEN GO 0 AND 2 FOR WEEKEND 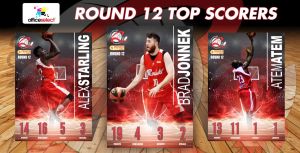 In the second game of what was always going to be a tough weekend, the Rocket Boys went down 75-83 to Forestville (buoyed by the inclusion of Adelaide 36er Majok Deng), making their quest for a top three position somewhat shaky.

Coach Hawkes did absolutely everything possible to wipe Saturday night’s loss to Southern out of the player’s minds and remain positive for the encounter and every indicator suggested the Boys were ready to go. But looks can be deceiving and so it was as Forestville got off to an absolute flyer with one of their best young shooters (Harris) lighting it up, despite plans being made to limit his input. By the quarter time break, with the score at 16-26, (Harris had 19 points on 7 of 9 shooting) we were struggling to get much happening at the offensive end with only Brad Jonnek showing any consistency with 6 points.

The 2nd saw the Boys get some better control at the defensive end, limiting Forestville to 15 points, with Alex keeping Deng to a total of just 10, but offensively we struggled again, managing just 16 points. Whilst the gap was narrowed to a “gettable” 9 at the long break, the Coaching staff weren’t happy with the effort and made sure every player knew what was expected in the second half, if we were to get back in the game.

The 3rd did see a response with a much better effort, particularly defensively, again limiting Forestville to just 15 points total. It was also great to see some urgency at the offensive end, particularly from Atem who scored 11 of our 23 points, and hit two massive “3’s” to really have the momentum going our way. At the last break the difference was just 1 point (55-56) and things seemed to be going our way as the players put in maximum effort at both ends.

Following a successful free throw by Forestville Nick Marshall hit a big “3” from the corner (on an assist by Brad) and we were actually 1 point up and again, seemingly, things had finally turned in our favour and we were getting reward for effort. A “3” from Forestville, followed by a layup from Alex (from a steal), saw the scores level, but just as suddenly as we gained momentum we lost it again. Forestville scored the next 10 points and it was 60-70 in a flash!!!!! A layup to Darcy and another “3” from Brad saw it back to just 5 points, but another run by Forestville (0-7) saw it blow out to 12 again with just 3 minutes left. Two successful free throws to Atem, a layup to Darcy (Forestville scored a 2) and a “3” from Brad (his 3rd for the game), saw one last ditch effort with the margin back to just 6 but Forestville scored the next 5 points, leading by 11 with seconds left when Alex hit a “3” to finish the game at 75-83.

Another disappointing loss, but a few positives to take away with every player scoring (Brad 19, Alex 14, Atem 13, Nick 10, Darcy 10, CJ 7 and Adam 2), everyone registering at least 1 rebound and all but one registering an assist. Also we won the rebound count 47-44, but sadly our shooting was again below par (at just 34%) meaning we had 13 more shots than Forestville but scored 8 points less!!

We have a bye next week (long weekend), with West up next at Hillcrest on Saturday the 16th of June. Hope to see you there.