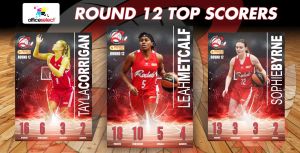 With Lauren on holidays, Jo stepped in to start with the usual group and after turnovers each end, Kirsty opened our scoring. Leah swished in a nice three and Tayla was on fire with rebounds and nice shots. Kirsty made a quick grab which assisted Sam to score and then Sam stole the ball and made a nice layup. Leah continued to delight the crowd with her determined effort and unique jump style to score. Abi and Courtney stepped onto the court and Abi soon took a rebound and assisted Tayla to score and Courtney grabbed the ball and Kirsty continued to score. A nice lead to us; 12 to 25.

Abi started the quarter being fouled and continued to play hard for the ball and then drove to the basket to be rewarded for her efforts. Courtney played well, assisting Leah to score and making both her foul shots. Sophie left the bench and after another Forestville turnover, Sophie made an accurate pass to Tayla who made the shot. Jo, Tayla and Leah continued to score and Abi’s defence was close and hassling. Jo persevered in her battle with Olivia and at half time, we were leading by 20; 33 to 53.

The starting five were back on and the inconsistent and confusing calls kept coming, frustrating Leah who was tech fouled for expressing this. The floor was pretty hard, she later said. The intensity increased, Sophie made a nice jump shot and Kirsty and Abi struggled hard for the ball. The play was fast with Tayla, Courtney and Abi increasing our lead. Up the other end great defensive rebounds were taken by Sam, Sophie and Courtney. Three’s came from Sophie and Courtney and after a fiery quarter, the score was 47 to 70.

Jo opened the last quarter with a layup and Sophie threw in a couple of three’s in one of her best games of the season. Leah continued with amazing speed, agility and accurate scoring. Taylor, Tia and Eliza joined the team on court and Taylor and Eliza’s height were handy for rebounds, with Eliza making a block and 4 rebounds. Tia ran the floor and Amy took a charge and made both of her foul shots. Great support from the bench and an outstanding performance by Leah ensured a pleasing win, 65 to 83.