ROCKET BOYS BACK IN THE WINNERS CIRCLE 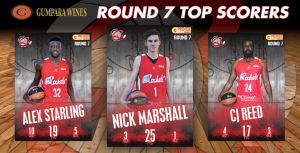 The North Adelaide Men’s Premier League team got itself back on track, after Wednesday’s loss to Norwood, with a comfortable 22 point win over Eastern at Mt. Barker on Saturday night. Whilst statistics show a good overall team performance, young Nick Marshall led the way at the offensive end with 25 points, whilst Atem Atem played his best game in the Red & White with 16 points, 14 rebounds, 2 assists and a blocked shot in what was a solid and very positive result!!

The game started with Alex winning the jump and Atem getting himself and the team off to a good start with a made basket within the first 15 seconds. A quick reply by Eastern saw Atem again score with a nice jump shot on a Brad Jonnek assist and there were good signs that the Boys were “up and about”. Adam Schild found himself involved in the next offence, managed to secure an offensive rebound and Atem again hit the scoreboard, from a CJ assist following some excellent ball movement. Adam then found himself in a good position, following an Alex rebound, and scored with a nice jump shot inside the keyway for an 8-5 lead. Atem’s first quarter was proving to be very successful as he scored the next two baskets, one a nice jump shot from the foul line and one a layup from a Brad assist, before Alex joined in with a basket and it was 14-7, with Eastern looking shaky. Alex scored again, as he started to assert himself on the game, Nick Marshall stepped in off the bench, scoring immediately, and then CJ calmly sunk a big “3” from the top of the key. It was all North at 26-13. A great start, with Atem leading the way with 10 points and 6 rebounds!!

The 2nd was much the same as the 1st with the Boys dominating most categories, even though Eastern got themselves off to a good start, scoring the first 5 points. Alex responded with the next 6 points off some excellent team rebounding and sharing of the ball in offence, but to their credit Eastern were hanging in with some hard work of their own. At 30-24, the North Boys went on a 15-0 run, to lead 45-24, with Alex, Brad, CJ and in particular Nick (12 points for the quarter) all scoring and Atem, Adam and Darcy all providing the opportunities with plenty of rebounds and assists. Matt Trandafil got an early opportunity to get involved and responded with a nice 2 point jump shot, from a Brad Jonnek defensive rebound and assist, and when the siren went it was 55-29 and things were looking fairly comfortable. In some good news we were 33-16 up on the rebound count and were shooting the ball at some 53% from the field, but the foul count was disappointing with CJ on 3, and Darcy, Adam & Atem all on 2, so a little improvement needed there.

It was always expected that at some stage Eastern would have a run, they have too many good players not to, and sure enough they had a good 3rd quarter outscoring us 14-28, reducing the deficit to just 12 at the start of the last. It started with them scoring the first 6 points as the Boys just didn’t seem to come out ready to play after the long break? With momentum on their side, suddenly Eastern felt like maybe they had a chance and played with a more positive attitude. Coach Hawkes called a time out to refocus the Boys but it had little effect as their only response was just 1 successful free throw in the next 2 minutes and the score was 56-39 with some six minutes still to play in the 3rd and everything seemingly going Eastern’s way. Atem got involved again, steadying the ship with a layup and Gab Saldavia had an excellent little cameo off the bench, hitting a couple of 3’s and scoring 8 points in total for his five minutes on court to give us a little momentum. But Eastern had enjoyed some good moments and had cut the deficit to just 12 by the time the siren went.

The last saw Eastern have one final run, managing to score 4 of the first 6 points, but 12 was as close as they got as the Boys again started to dominate most of the important categories. Alex and Nick scored, followed by CJ with another long 3 from the top of the key and the lead was 15 and clearly increasing, as Eastern searched for ways to keep themselves within touch. Nick Marshall with 11 points for the quarter was having a night out (25 points in total), and the Boys slowly but surely increased the lead to 22 by the time the final siren went, with Riley Slater, Matt and Gab Saldavia all enjoying some valuable minutes.

Statistical leaders were Nick, leading the way with his (career high) 25 points, 3 rebounds, 1 assist and a steal; Alex with another “double-double” 19 points, 10 rebounds, 4 assists, 3 steals and an amazing 5 blocks; CJ with 17 points, 3 rebounds, 4 assists and 2 steals and Atem with (in his best game to date), 16 points, 14 rebounds, 2 assists, a steal and he also took a great charge!!!!! Brad Jonnek despite having a quiet night on the scoreboard with 5 points, had 7 rebounds, 6 assists and 3 steals.

A decent team performance from the Boys leaving them at 5 wins and 2 losses with a week’s break before we take on Woodville at Hillcrest on the 12th of May. So a chance to regroup, assess where we are and move on to the next phase of the Premier League season. Hope to see you on the 12th!!