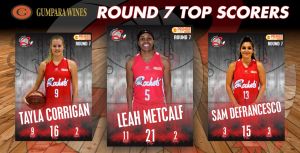 After a long drive up the freeway, the team were ready to take on Mavs; with Kirsty, Leah, Sam, Tayla and Courtney as the starting five. Leah opened the scoring with a swished in three and Sam followed with a lovely basket. Kirsty was playing close defence and already had 2 fouls, so Jo took her place. Lots of fouls from both teams were called and Leah, Tayla and Courtney all made the most of it. Great steals and accurate passing assisted the team to increase the lead. Abi came on and made a quick shot. Tia came on to take her turn and Tayla’s height proved really handy for rebounds. At quarter time the score was 20 to 36 our way.

The play was fast paced and the defence was very focussed and Jo, Leah and Sam continued to have accurate shots. Kirsty made a terrific intercept and as Taylor left the bench, she played her role well taking a rebound. Our scoring stopped towards the end of the quarter and at half time the score was 37 to 50.

The starting five were back on and although Courtney made a lovely twisting drive, she didn’t score and the drought wasn’t broken for a few minutes when Leah assisted Kirsty to get our first basket of the quarter. Abi and Kirsty fought hard for the ball and as Kirsty pushed through to grab her own rebound, she was fouled and made both the shots. Eliza came on and quickly got a shot in and then scored again and took a great rebound. Mavs had kept up with us, as their new import had settled into the play and was starting to score. The margin was back to 10; 57 to 67.

We were trading baskets again and there were a lot of intercepts that led to scores. As they were told to match up; Jo was defended by 3 players and drew a foul, making one out of the two. Sam and Tayla kept on scoring, so too Leah but Mavs had clawed the margin back to 4. Tayla was able to take rebounds at both ends of the court and great teamwork throughout the game contributed to a win of 81 to 86.

The top scorers were: Leah 21pts, Tayla C 16 pts, Sam 15 pts and Jo with 11 pts with the top assists by Jo with 8 Assists and most rebounds went to Jo and Leah with both having 11.
The Girls are now 7 wins in a row.

Looking forward to a break next weekend due to State Champs but see you the week after when we take on Woodville Warriors!