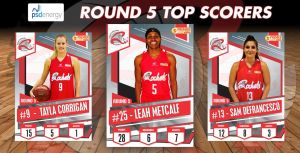 Just a small crowd joined us for first versus second but we were glad we went. With a focus on strong defence; Lauren, Kirsty, Leah, Tayla and Sam were the starting five. Sturt opened the scoring quickly and Sam drove hard to the basket but was fouled and made one from the two shots. She quickly scored again, followed by Tayla making both of the foul shots awarded to her. Jo left the bench as Leah drove hard to the basket, was fouled and made her shot. Sam made a great block which excited the crowd and with more accurate scoring, Sturt was only leading by 2. Courtney came on the court and Jo counteracted her extra efforts under the ring, with hanging on Sturt’s ring and giving away 2 points. They had a surprising lead at quarter time; 12 to 24.

Courtney replied to Sturt’s scoring with a three and Lauren made a terrific steal, which led to Courtney making a nice layup. Determined to win the quarter; better team work was displayed and Taylor stepped onto the court; Jo took a stretched out rebound; Tayla hit a nice shot; Leah drove hard to the basket and they were supported by close, tough defence from Taylor, Courtney, Kirsty and Lauren. The scores were level and three quick threes from Sam and 2 from Leah gave us a lead, which was 42 to 32 at half time. What an amazing turn around!

The crowd and the bench got louder to encourage the team and Leah was scoring furiously. Tayla scored again and great screens assisted more baskets. Abi came on as the pace picked up again. It was a really high scoring quarter as Sturt did not a give an inch. Baskets were traded and the team were instructed to get a stop. At three quarter time the score was 61 to 55.

Sam made a terrific backwards layup and Jo drew a foul and made both her shots. She continued to play fierce defence and got called for a block. She made a great intercept but was then called for a charge and left the court on five fouls. The pressure was mounting and Lauren made a fast drive to score, but with more clever passing and flowing plays, the team kept the lead and won by 6. The final score was 75 to 69 in an exciting, high quality game.

See you on ANZAC day at the ARC when we play Norwood.