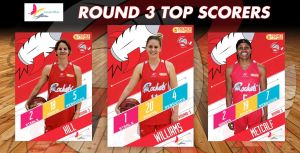 We all arrived early to get a good seat to cheer on and congratulate, club legend Jo Hill on playing 300 ABA/Premier League games. It was also a terrific fundraiser for Beyond Blue, a charity that means a lot to Jo and thank you to everyone for your generous support.

The starting five of Tayla, Kirsty, Lauren, Sam and Leah got off to a slow and scrappy start against a young, tall Forestville side but Tayla responded to their opening score and we never really looked back after that. Jo left the bench to loud cheering and Lauren, Kirsty and Jo all contributed to the score. Sam and Leah played close defence and Jo was cheered again for an amazing backwards layup. Courtney and Sophie stepped onto the court and played their roles well. Sam swished in a lovely three and at quarter time we were leading 23 to 20.

It was another slow start to the quarter as we played strong defence but showed a reluctancy to shoot. A nice steal by Kirsty assisted Leah to do a great layup. There were some terrific intercepts and great passing and as Lauren continued to be speedy around the court she took a sneaky steal and rewarded herself with a nice layup. The lead had grown to 10; 44 to 34.

Great teamwork increased the lead again this quarter as the starting five passed well and provided great ball pressure. Leah and Sam made fabulous three’s and Taylor joined the team and took a great rebound. Eliza came on in the dying seconds of the quarter and assisted Kirsty to score right on the buzzer. The score was 64 to 49.

Lots of fouls were called in the last quarter but Lauren kept her pace up around the court and Sophie and Leah kept scoring. Jo was terrific and as the team stayed positive and focussed, they didn’t let Forestville back into the game, with the final score being 78 to 64.

Congratulations again to Jo on her actual 301st game and to the team for sharing the win with her.

See you next week at Port Adelaide when we take on West at 6:30pm.