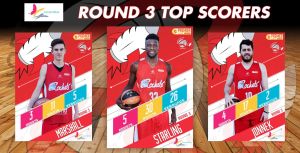 Following a poor showing in Round 2, and a bye last week, the North Adelaide Men’s Premier League team were looking to make a statement against Forestville in their Hillcrest game on Saturday night, and so it proved to be with a solid 18 point win off the back of a “career” game from Alex Starling.

The evening got off to a wonderful start with the celebration of Jo Hill’s 300th game in the red & white, and it was a rare opportunity for both squads to come together for a photo wearing their new uniforms and commemorative T-shirts. On behalf of the entire Men’s program, I would pass on our congratulations to Jo on this wonderful achievement. You are an absolute champion of the sport and deserve all the accolades you receive from the kids you help, parents, team mates, Coaches, Club supporters and each & every member of the basketball community. Well done.

The preparation for the Forestville game was a little disjointed for the Boys, with some speculation as to who would “suit” for the Eagles, with 36er’s Brendan Teys, Adam Doyle and Daniel Johnson all available. Having said that the focus was getting our game back on track following Round 2’s loss to Southern.

Coach Hawkes went with Adam, Alex, Atem, CJ and Brad as the starting 5 and felt we matched up well with Forestville’s starters (Wright, Teys, Harris, Richard and Doyle). The game started well with Alex winning the jump ball and getting the ball to Atem, who unfortunately missed the shot, but it was obvious that the Boys were “up and about”. A defensive rebound to Alex saw him score on a layup following a nice interchange with Brad and it was 2-0. Another defensive rebound to Alex and this time Brad scored on a jumper, followed by a free throw. A big dunk from Atem and a layup from Alex and suddenly it was 9-2 and Forestville must have been thinking it needed a time out? They hung in however and managed to steady a little with some free throws before the Boys got rolling again, Alex dominating the boards (6 for the quarter), and the scoring (8 for the quarter). The only downside was the unnecessary fouls, with 8 by the quarter time break and Forestville getting to the line 10 times!! This was keeping them in the game, allowing them to score 8 of their points from the foul line for a quarter time score of 17-12.

The 2nd started like the 1st finished, with Forestville on the foul line, narrowing the gap to just 3, before Nick Marshall scored on an assist from Atem. Nick then stole the ball on a bad pass, scored again on an excellent layup and we were off and running. A couple more defensive rebounds from Alex saw Atem get the opportunity to score on a jump shot, then a big “3” following a CJ assist and suddenly the score was 26-14. To say Alex dominated the boards in the 2nd is an understatement. By the long break he had 17 rebounds (9 offensive!!), and his dominance ensured we had plenty of opportunities. He also had 17 points and 2 assists. But, on the downside, as a team, we continued to rack up the fouls and allow Forestville the opportunity to stay close from the foul line. Despite some excellent defence keeping them to just 6 of 25 from the field (24%), they kept themselves within touch at 37-29 by scoring 16 points from the free throw line (from 22 opportunities). The lead had built to 15 (37-20) with 3 and a half minutes to the main break, but we switched off a little and allowed Forestville to score the last 9 points.

Despite a very good start, Nick (8 points, 3 rebounds and a steal) and Brad (5 points, 1 rebound and 3 assists) both picked up their 3rd foul, potentially restricting their influence in the second half. Others in foul trouble of sorts included Adam (4 rebounds and a big block), Atem (7 points, 4 rebounds and an assist), and Alex all on 2 and needing to be a little careful.

The 3rd was a high scoring affair, with us managing 26 points and Forestville 24, resulting in a difference at the last break of 10 (63-53). Doyle found his range scoring four 3’s and Teys scored 10 points despite plenty of focus from the Boys in defence, whilst for us, Alex scored 7, CJ 6 (two big 3’s), Adam 4, Brad 6 and Darcy a well-timed “3” so it was very positive to see we were getting input from everyone and not relying on one or two. By the three quarter time break Alex had 22 rebounds (we had 45 as a team to Forestville’s 26) indicating a dominance much bigger than the scores indicated.

The last quarter saw the Boys dominate defensively allowing just 13 points from Forestville, (helped by two massive blocks from Adam), whilst scoring 21 themselves. To be fair Forestville did hang in, always giving themselves a chance with some good shooting, but an early layup to Alex (on a Nick assist), and a massive “3” as the clock expired for Darcy (following some good ball movement) and the difference was 15 within the first 30 seconds. CJ scored a “3” following his own offensive rebound, Alex and Brad (twice) made layups and Forestville answered with some excellent individual work by Teys and Richard, seeing the margin hover around the 14-16 mark for much of the quarter, before finishing at 18 on a Brad jumpshot seconds before the final siren.

A good night for the Boys (and the Women of course), but a massive challenge this week with West at Port Adelaide. So an opportunity to extract a little revenge for last year’s Preliminary Final loss perhaps?? See you at the Port.