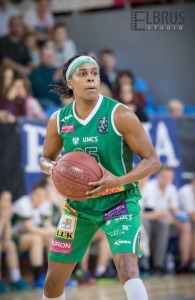 The North Adelaide Basketball Club is pleased and excited to announce the signing of Point Guard Leah Metcalf as an “import” for the 2018 Women’s Premier League season commencing March the 17th with a home game against South Adelaide at Hillcrest.

Leah’s resume has to be read to be believed with a long history of achievement and awards. Her web page (http://leahmetcalf.com/the-athlete/) is the best place to see her athletic achievements, as anything I can put here just wouldn’t do her justice, but here is a very short summary –

High school (Charlotte Christian School, where she graduated with Honors) saw her basketball team win the State Championship in her junior year. She was also an outstanding track & field athlete, winning State Championships and All-State honors in several disciplines.

Leah then spent 4 years at the famous University of North Carolina playing more than 30 games each season, achieving many accolades including being team Captain, making all ACC teams and ACC All Academic Teams (in each of her 4 years at College), culminating in two prestigious awards in her senior year – the Coach’s Award and the Leadership Award!! She also led the team to an ACC Championship and an NCAA Elite 8 appearance. Quite a College career!!!

Since graduating, with a Bachelor of Science, Leah attended two WNBA training Camps, (LA Sparks and the Seattle Storm) but choose a path to Europe where she has enjoyed a very successful professional basketball career, playing in what are recognised as some of the best leagues in the world, in Sweden, Luxembourg, France, Poland and Russia. Again her achievements are just too many to list (check out that website), but an example is her MVP at the 2016 Polish Cup!!

In addition to her unbelievable basketball career, Leah has extensive experience as a basketball & fitness trainer. She conducted many of her own basketball camps at North Carolina and worked for the Charlotte Hornets NBA franchise in its junior basketball camp, established for young girls.

In short folks, she is a superstar on and off the court and will be an inspiration to all the youngsters at North. We look forward to welcoming her to Hillcrest.

The first time you will be able to see her (all being well) will be the Family Fun Day at Hillcrest on Saturday the 10th of March at 11:00am. Don’t miss it.

To see Leah’s complete story, visit the website at - http://leahmetcalf.com/