LIGHTSVIEW FACILITY UP AND RUNNING!! 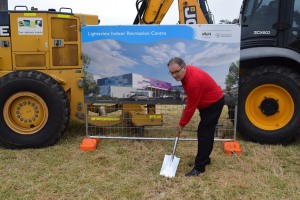 Fickle weather did not stop the big event from happening today, (and there are some pictures attached to prove it), with the FIRST SOD TURNED, on the new facility at Lightsview.

With a number of Rockets members in the enthusiastic crowd, there was a big round of applause to signal the start of what should be an exciting 18 months as the 5 court facility takes shape.

The next few weeks will see some land clearing before the first signs of what is to come are evident with the laying of foundation materials initially for the car park at the eastern end. All being well there will be regular updates.

In an effort to make sure things were kept moving, David Durant (VP Basketball), who has been involved with the potential of a new stadium for so many years, even picked up a spade!!