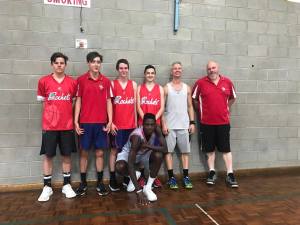 Back on the 24th of October we posted some information on the East Coast Challenge Tournament. Well we now have a photo to go with that.

Who ALL made the Boys SA Metro team for the 2018 Under 16 East Coast Challenge tournament to be held from the 10th to the 12th of January, 2018 at the Sydney Academy of Sports.

Amazing effort that 6 players from the same team make the squad, congratulations Boys!!!!