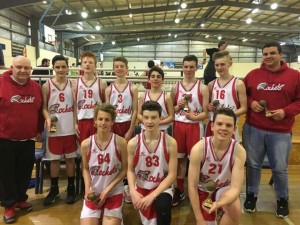 The boys went into this game as underdogs having lost to Norwood previously by 30 points however had confidence after a good win in the semi finals.

The boys started well and scores were even at quarter time. Ball movement was good as was our defence. Norwood struggled to stop us and went into a zone for the rest of the game. Our offensive plays and our desperate defence kept our noses in front.

Last quarter we got a 10 point lead which Norwood couldn't bridge. Running out winners 36 to 26.

The boys also were Summer GF premiers. Winning Div 5 premiership and then taking out the Div 4 prize.

I think you can say this team had an outstanding year.