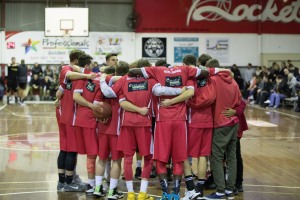 The North Adelaide Men’s Premier League team missed an opportunity to move straight to the Grand Final on Saturday night, going down to Southern Tigers 66-78, in a game where they never really found their mojo. Poor shooting was the order of the night both from the field and the foul line and it eventually took its toll. The Boys now move to the Preliminary Final this Saturday at Hillcrest versus West for a second chance to get themselves to the “Big Dance”.

The first five which has been consistent for a number of weeks now, was Ray, Adam, Alex, Aric and Brad and they got off to a reasonably bright start. Aric scored on the first possession with a nice right handed layup under pressure and was awarded an “and one” which he calmly sank for a 3-0 lead, so far so good!! Then Alex managed a dunk following a defensive rebound and assist from Ray Harding who had also started well, 5-0. The Southern Boys were struggling a little at this early stage with 2 turnovers and 3 missed shots, as the defensive pressure was applied, but that wasn’t going to last forever. They were getting second opportunities with Dodman active on the offensive boards and eventually that saw them score their first basket. It was a dour affair at times, with both squads well aware of their opponents strengths and every defensive effort was made to close them down. At the five minute mark it was just 6-2 and a good indicator of how the night would progress. With just less than two minutes left the score was 11-11 before a little rush saw Aric score twice, followed by a response from Southern and the score was 15-14. Both coaches would have been pleased with the defensive effort but offensively neither team was anywhere near its best. Southern were shooting the ball at 31% (5/16) whilst North were just 27% (6/22).

The 2nd quarter was much like the first with defences well on top, some average shooting, and two very close teams on the scoreboard. By the main break the lead had changed 9 times and been level 5 times, which indicated the closeness of the contest. Alex got us up and running with a defensive rebound, a layup and a free throw (missed), but Southern replied through Schenscher. By the five minute mark the scores were tied again at 21-21, with no one able to get on any sort of run. Ray Harding hit a nice “3” which appeared to shift momentum, Alex continued having an effect on the scoreboard with 6 points and Aric scored to make our half time score 32, but Southern had Drmic and Dodman (who had 12 points and 9 rebounds by half time), making sure they weren’t out of it. Again shooting percentage was a worry even though it had snuck up to 30% by the main break (12/40), but our free throws were poor. We had gone to the line a solid 15 times but managed to score just 6 times!! A statistic that would come back and bite us later in the contest.

The 3rd quarter started poorly with us missing the first three shots, before Alex scored a field goal with almost a minute and a half gone. However there wasn’t too much damage done as Southern were also struggling. Alex then made two free throws to tie the score at 36-36 with three minutes gone. John Wernham then made two free throws, before a quiet patch offensively saw Southern lead by 6 before a Leroy steal and a dunk to Alex saw us back to 41-45 with just under four minutes to go. Brad then made his first field goal for the game to get the difference to just 2 but a 3 pointer by Southern on the next play saw them lead by 5 again. Brad, Leroy and Adam all scored in what was one of the better offensive patches, but Southern continued to respond not allowing the momentum to swing completely, but we had narrowed the gap to just 1 at the final break 51-52.

The last quarter was disappointing overall, despite a bright start. Southern for the first time in the game got some consecutive baskets, outrebounded us and played the game at their pace. A quick “3” saw them lead by 4 points early but Brad Jonnek, responded immediately with a “3” of his own and when he scored again following a Luke Mapunda assist the scores were tied at 56 with a minute and a half gone. With Alex adding a powerful layup and us leading by 2 (58-56), the moment had arrived where the game was there for the taking?? Southern called a time out to slow things down and it worked, with the game becoming a half court slog again and them getting back into their rhythm. With two minutes fifty one seconds to go, an Aric 3 pointer made the difference just 1 (65-66) but Southern went on a 0-10 run following several missed shots and free throws from us and the game was effectively over, down 10 with just 23 seconds to go.

Anyhow, we need to move on quickly with a BIG game this week in the Preliminary Final against a very confident West at Hillcrest. There will be a big crowd so make sure you get there early. Tip-off is 7:15pm.