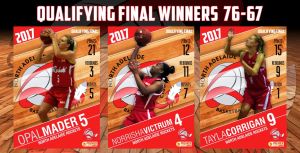 We were blessed to see a high quality game Saturday night as our starting five of Opal, Norrisha, Tayla, Kirsty and Lauren played exceptionally well and so too did Alex for Mavs. It was always going to be a tough game and it took a nice rebound from Tayla to get us going and a fabulous layup from Norrisha got a great cheer from the bench. When she scored again quickly, the crowd knew they were in for a treat; as Tayla scored, Kirsty took a great rebound and Lauren was fouled going for a shot. Opal made a nice shot, Norrisha took a rebound and ran quickly down the court and then after a second effort from Opal, she eventually swished in a three. Laruen took a great intercept and then Jo stepped onto the court. Norrisha continued to score and then Courtney left the bench. Mavs fought back, but with great teamwork, we were leading by 2 at quarter time; 23 to 25.

Sophie had her turn and scored quickly and then assisted Jo to make her shot. Norrisha crumbed the ball from some messy play and then Kirsty took a strong rebound and ran the floor to score. Tayla continued to score well and made the bonus after being fouled. This brought the bench to their feet cheering and this continued as Opal made another beautiful three. Strong defence led to a travel finally being called and our rebounding seemed to improve both ends of the court. Kirsty made a reverse layup and Lauren made a smooth three. After a time out; Taylor G stepped on the court and quickly took a rebound. Tayla scored again and then Taylor G’s second effort shooting and then rebounding, paid off. The score at the long break was 39 to 50,our way.

The third quarter started with fast pace and several turnovers both ends. Quick passing assisted Tayla to score, whilst both Kirsty and Lauren upset Mavs flow of play. Again Opal scored a lovely three and the starting five players all played their roles with skill and passion. Lauren drove hard to the basket and was flattened and got up and made one of her foul shots. Courtney took a quick shot and Sophie swished in a three. Taylor G made a sneaky shot and at the end of the quarter, thanks to continuing strong defence, we were still up 55 to 66.

We had a really strong start for the last quarter as Taylor G took a strong rebound, Sophie made a massive three and Kirsty was flattened. Up you get shouted the coach and Kirsty showed extraordinary resilience and determination as she got up and finished the game strongly. Opal replied to a late Mavs run with a nice shot and so did Tayla. At the end the Lady Rockets had prevailed and won soundly 67 to 76.

Thank you to all who came up the hill to support the team.

See you at Morphett Vale Saturday night as we take on the Southern Tigers at 6:30pm.