Rocket Boys Go Down to Southern 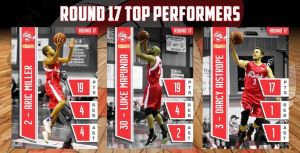 North Adelaide Men’s Premier League team couldn’t control Southern’s 36er Anthony Drmic (who finished with 41 points) for the full forty minutes on Saturday night at Noarlunga, and paid the price, going down by 16 in what was none the less, a fighting effort by the entire team, especially given the late withdrawal of Alex Starling.

The absence of Alex saw the starting five change again (after having been so stable for so long), with Aric, Brad, Adam, Leroy and Ray taking the court for tip off and the Boys got off to a reasonable start with an early 6-4 lead on a Ray Harding 3 pointer. It was certainly a fast paced game and the ball moved quickly as both teams looked for the advantage, but Southern’s 3 point shooting was already proving difficult to counter. Aric put us in front at 14-12 before Drmic hit his second 3 for the quarter and we were down 14-15 with five minutes to go. The teams traded baskets for the next few offences before Southern had a little run and put themselves 8 up and that is what the margin remained at the first break, despite baskets from Darcy and a long 3 by Jordan Murphy, who had replaced Ray at the point. Disappointingly we were well behind on the boards (4-9), and has been the case several times recently, field goal percentage (53% to 67%).

The 2nd quarter started with a couple of turnovers, some fouls and some missed shots but thankfully Southern despite scoring, were not running smoothly either and didn’t take full advantage. Then suddenly Aric, Ray and Darcy all scored layups to keep us in touch at 30-36 with three minutes gone. An unnecessary quick shot then gave Southern the chance to finish with a big dunk shifting momentum completely away from us and the score was suddenly 30-43. Leroy had enjoyed a good start and was up to 13 points by half time, supported by Aric on 11 and Raymond on 9 but our shooting percentage had fallen to 44 (Southern were still well above at 56%), with just 8 of 21 shots successful for the term. Half time score was 44-57 and there was plenty of work to do to get the game back on our terms.

The 3rd term was competitive with the score being 17-18 but this left the margin at 14 in Southern’s favour and nothing suggested that was going to be bridged in a hurry. Leroy, John, and Darcy (with a long 3 pointer) all scored to get it back to 10 at the 7 minute mark, but Southern replied almost immediately and had it out to 14 again on another Drmic “3”. The teams traded baskets for the last few minutes and despite the lead never getting to more than 16, the Boys just couldn’t get it to a margin they could genuinely attack in the last. Three quarter time score was 61-75.

The last started with two quick baskets to Southern taking the lead to 18, but Brad Jonnek finally got himself going and scored 5 points with a 3 pointer, followed by a defensive rebound and a quick transition 2 to get the difference to 13 with almost nine minutes to go and maybe a glimmer of hope. But again Southern responded, Drmic hit a 3, then stole the ball for a layup and in the blink of an eye the margin was 18 again!! With the game out of reach, both teams introduced some of their less experienced players and it was great to see Nathan Furse make his on court debut, acquitting himself well with 2 big offensive rebounds and an uncredited blocked shot. He also took the opportunity to get a long shot up from beyond the 3 point arc, but unfortunately it missed. Final score was 85-101, which when looked at statistically came mainly from shooting. We got up 13 more shots than Southern (81-68), yet scored on 7 less (32 to 39). Overall we shot the ball at 39.5% (32 of 81) whereas Southern shot 57.4% (39 of 68). We competed well on the boards at 41-42 (with 16 offensive boards to 7) and our turnovers were excellent at just 9 (to Southern’s 13), but it’s about putting the ball in the basket.

A tough road trip, which does put some pressure on for this week’s LAST MINOR ROUND game against West. To finish top we must win, so get yourself along to Hillcrest on Saturday and cheer the Boys along to the minor premiership.