Ladies With Comfortable win over Centrals 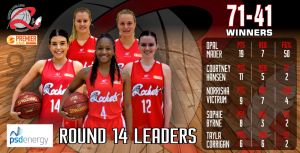 After a terrific win for the men’s team, it was finally our turn to take on Centrals.  Tayla, Norrisha, Opal, Kirsty and Courtney were our starting five and Courtney scored quickly with a lovely three! Opal took a nice shot, followed by great layups from Tayla and Norrisha. The defensive pressure was strong but Centrals kept up with our scoring. Lauren was welcomed back into the team and played tough defence all game. Norrisha scrambled for the ball and Kirsty caused a Central’s shot clock violation. Taylor and Sophie stepped on the court and at quarter time, the score was 19 to 16 our way.

Lauren took a nice shot, to open the second quarter and then treated the crowd to a sneaky steal and terrific layup. She tried again but was fouled. Taylor took a strong grab and Sophie made a long shot, just inside the 3 point line. We were scoring well and after a time out, Abi joined the team on court. She earned her spot with good defence and great team work which led to Opal rebounding the ball and making her shot. Kirsty assisted Abi to score and then Tia left the bench. Bethany Dittmar made her debut for the season in Premier League and as the clock was ticking down, Opal took another rebound and was fouled, and made one from two shots. She was the top scorer at half time with the score being 40 to 24.

The starting five were back on and Tayla opened with a layup. Courtney made a steal and ran the court and was fouled as she was shooting. She made both shots and Norrisha made a nice layup, was fouled and made the most of the bonus. Sophie swished a three and our defensive pressure caused another shot clock violation. Sophie assisted Kirsty with 2 points and Taylor’s second efforts under the ring were rewarded with foul shots, from which she made one. At three quarter time our lead had continued to grow to 21 points; 53 to 32.

The team were scoring from all angles; Tayla under the basket, Sophie from the 3 point line and Courtney from the foul line. Taylor caused a jump ball and Opal kept building the lead too. Centrals were frustrated and their fouls were mounting. Courtney and Sophie took turns in the last 3 minutes to lead the bench players to consolidate the win. Tia passed to Bethany who made a nice shot. Courtney made one of her foul shots, so did Tia after an obvious shove. Bethany took a strong rebound and both Abi and Tia made one from two of their foul shots. A fabulous team effort all round, with the final score: 71 to 39!

Top scorers: Opal with19 pts and Courtney with 11pts

Top rebounds: Taylor with 9 and 7

Don’t forget that too much basketball is never enough, as there’s a double header next weekend.