LADIES MAKE IT 2 AND 0 IN DOUBLE HEADER WEEKEND 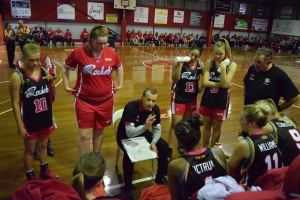 Wearing black fundraising tops for Beyond Blue and Black Dog, our starting five looked to score quickly with Norrisha and then Tayla making nice shots. As the key was left wide open, Kirsty popped one in and then Courtney was fouled driving hard to the basket and made one out of the two shots. Tayla made one of many great rebounds for the game and Opal made a swish three. Jo then stepped onto her own court and set a high example of work rate and effort required. After a nice shot she was joined by team mates for high pressure defence where she grabbed the ball and as she went to shoot, was fouled with a shove. It was deemed unsportsmanlike and Jo made 1 out of the 2 shots. Sophie left the bench and Jo made a long pass to Tayla who made the basket. Kirsty assisted Norrisha as she then ran the court and finished off with a layup. Sophie was able to swish in a three and Jo stole the ball back and clearly frustrated the Woodville coach who was tech fouled. The pace picked up and at quarter time Rockets had made a flying start, leading 32 to 15.

Taylor came on and the scoring started quickly again with both Sophie and Jo scoring twice within a couple of minutes. Tia joined the team on court and it was Opal’s turn to score twice quickly and Tayla made the most of her foul shots. Abi and Shannon stepped onto the court and as the defensive play was a bit of a scramble, Norrisha took off fast with the ball only to be pulled up because she was fouled and given 2 shots. She made one of 2 and Woodville then seemed to have a run of easy shots, interrupted by a nice three from Courtney. The margin was reduced to 14 but Tayla and Courtney continued to shoot well. Half time score was 58 to 45.

The starting five were looking serious but 3 turnovers and unanswered Woodville scoring was not what the crowd expected. Kirsty broke the drought and then scored again from a tricky assist from Norrisha. Opal, Courtney and Tayla played hard to get the baskets and a sneaky steal from Norrisha finished off with a nice layup, all increased our lead again. Sophie showed strong hands and Jo continued in her determined and skilful style with a three and got flattened for her efforts. A better quarter overall with the lead now 23; 83 to 60.

The coach called for ball reversal after another quarter started with fierce defence at both ends causing turnovers. Tayla finally scored for us after 3 and a half minutes and Courtney made both shots after being flattened driving to the basket. Jo made a classic layup and the margin increased but Woodville didn’t give up. Ana came on to run the floor and Opal made a lovely shot to take the score to 100 but alas it was only 2 points. The final score was 99 to 84, a satisfying victory with a margin that could have been greater. Jo and Tayla played an outstanding game, supported by the rest of the starting five in particular.

Top scorers were: Jo 23pts, Tayla 18pts, Norrisha 17pts, Courtney 15pts and Opal with 12pts
Top assists were: Norrisha 7 assists, Jo 6 assist and Sophie had 5 assists
Most rebounds were: Tayla with 12 and Jo with 11 rebounds

Enjoy the long weekend and see you at the new ARC where we take on Norwood on the 17th.