Rocket Men go Down to West 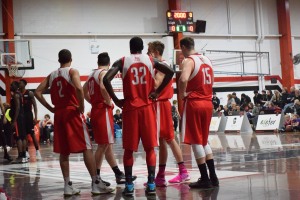 Following their amazing double overtime win over Southern last week, the North Adelaide Men’s Premier League team entered the game against West full of confidence even though the Bearcats also had a good win in the previous round against Forestville. Unfortunately, despite amazing scoring games from Aric (44 points) and Alex (36 points), the boys never really found their rhythm, behind for all but the first 12 seconds despite a comeback of sorts in the 4th, before losing 99-105.

The first five has remained consistent for a number of weeks now with Alex, Aric, Adam, Leroy and Darcy entering the fray against the experienced West team, who had obviously done their homework on what it would take to disrupt the Rocket’s running game. We scored the first basket (the only time we led the game), but West quickly responded and rattled off 10 unanswered points. In the same three minute period, the boys missed 7 straight shots, so it wasn’t a matter of not creating opportunities, it was a matter of putting the ball in the basket. Alex got himself into the game with the next 6 points, but West continued on with their game plan and before we knew it the score was 8-19 and adjustments had to be made. Coach Hawkes went to the bench and introduced John Wernham and Ray Harding and suddenly things looked a little brighter with the deficit reduced to just 5 on the back of two free throws from Leroy, a layup by Aric and a tip in by Alex. Brad Jonnek then stepped up with a nice jump shot and Alex hit a 3 pointer on the buzzer to see the quarter time score at 24-27. Not a bad result given the start we had made.

The Boys found themselves down 10 very quickly in the second when West hit their first three shots and we missed 3 of ours. Coach Hawkes went to the bench and again they responded when John made a layup, but it just wasn’t working for us with West rattling off another 0-7 run to take the lead by 15 at 26-41 at the five minute mark!! A time out, a readjustment and five quick points saw the deficit quickly reduced back to 10, but it was something of basket for basket for the last few minutes where despite some ordinary offence the boys found themselves within touch at just 9 points down at the long break. Aric had 16 points, 5 rebounds and 2 assists, whilst Alex had 18 points and 3 rebounds but they were playing something of a lone hand on the scoreboard with no one else having scored more than 2.

The 3rd was a tough one. The Boys again started slowly with West going on a 0-5 run and the lead was 14 with just 1 minute 10 seconds gone. The lead hovered between the 12 and 15 mark for most of the quarter with Alex and Aric keeping us in it, although Brad did hit a big 3 and for a minute or two we thought the tide had turned, but to no avail. The three quarter time score was 65-77 and West had to a degree, given us just the slightest opportunity to turn things around.

The last was by far our best scoring quarter with 34 points (24, 16 and 15 for the first three), so from an offensive perspective things did change to a degree. But at the defensive end we allowed West to continue to score too easily. Within the first two minutes the score was 67-86 and the game was almost out of reach. We had to do a lot right to stay in touch and unfortunately it wasn’t going to happen tonight, although we did have a crack at it. An 8-1 run helped a little but West remained in control at 74-87. Then suddenly, with a couple of minutes of “Miller Time” the deficit was reduced to just 6 with a minute to go!!! Alex then suddenly burst into life and the difference was 4 with twenty one seconds to go. Thoughts were returning to the previous Saturday when the Boys found a way to extend the game into overtime. We needed the ball however and despite targeting West’s less reliable foul shooters, they responded by hitting foul shots and seeing the game out safely with the final score 99-105.

Not a great night all round. From our perspective a stop-start game where we shot reasonably at 44%, but allowed West to score at 59%, with too many layups. They also beat us on the boards (30-36) which up to this game has proven to be a big positive for us. Our assists were also well down at just 12 which indicated a team effort that was not where it should be. Alex had another “double-double with 36 points, 10 rebounds, 2 assists and 4 steals, whilst Aric had 44 points, 6 rebounds, 3 assists and 3 steals. The next highest scorer was Brad with 7, to go with 3 rebounds, an assist and a steal.

Anyhow with a double header for the weekend there was little time to dwell on the result as our thoughts quickly moved to Sunday and a home game versus Woodville.