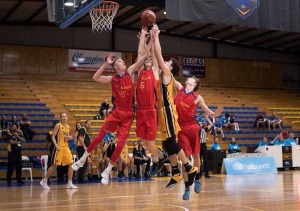 A slightly belated congratulations to Raymond Harding from our Men's Premier League team for his efforts in winning GOLD at the recent 2017, Under 20 Australian National Championships, representing South Australia Metro. SA pulled off an amazing comeback in the fourth quarter to secure their first Under-20 men's title since 1993 and just their sixth in the history of the competition. The team played a very strong NSW Metro in the final and prevailed 75-66.

Ray has represented the State at Under 18 level also but most of the Rockets family would probably not have known too much about him until he debuted for the Men's Premier League team, playing 10 games in 2016, as a 16 year old!! Now in his second year with the PL side, Ray has shown maturity well beyond his years holding down the point guard spot on a regular basis. Congratulations Ray in what is another milestone in a blossoming career!!