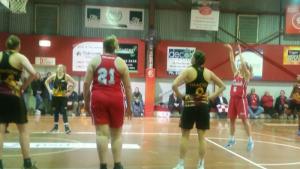 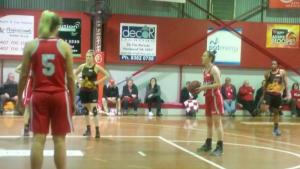 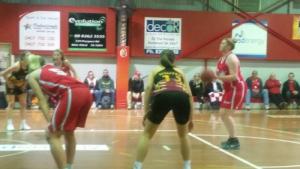 The battle for second place was started by Jo, Kirsty, Shannon M, Sarah and Opal. It was always going to be a tough match and it took a foul on Sarah to open our scoring with one point. Our shots were off and Southern went on an unanswered scoring run of 15. Lauren left the bench and so too did Shannon Tarran to step in for Jo who was already on 3 fouls. Lauren and Opal continued to score and after a big shove, Opal shot both foul shots. Shannon T’s height was handy for rebounds and then Sophie and Georgia stepped on the court. At quarter time the Rockets had fought back to be down 14 to 24.

The girls displayed determination and great team work as Sophie passed to Georgia who scored and Sophie was rewarded with a successful layup. Shannon T scored nicely but the half time score was 22 to 40.

The starting five were back on and both Kirsty and Opal took full on charges. Jo finally scored and we were starting to cheer. Opal made a nice shot and Courtney took to the court and immediately grabbed a good rebound. Kelsey and Taylor got off the bench and Taylor quickly stole the ball and then Shannon M drove hard, was fouled and made the bonus. Kelsey made a nice 3 and Courtney got us on our feet with a sneaky three on the buzzer. The deficit was now only five, 42 to 47.

Strong defence caused some turnovers and Jo made a fabulous shot. Sophie made a smooth shot and as we stole another turnover from Southern, the score was 46 to 47. Jo scored for the lead but seconds later it was back to Rockets being one point down. Opal made a sweet layup and the home crowd were on their feet. The quarter was full of scrambles and jump balls and the score was tied at 50 all. Southern just had more accurate shooting on the night and ran away in the last couple of minutes to win by ten, 50 to 60.

Our top rebounders were: Jo with 10 and Opal with 7 rebounds

Our top scorers were: Opal with 16 pts and Sophie with 7 pts

Be sure to bring your home crowd support to Hillcrest Saturday night 6.30pm as we take on Forestville to continue our finals campaign. Thank you again to all our volunteers who work so hard to support our club, your efforts are much appreciated.