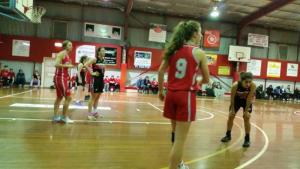 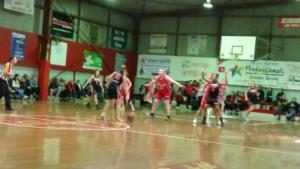 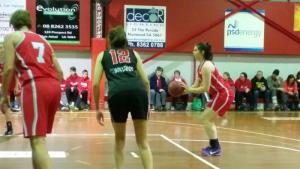 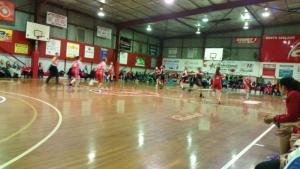 It was always going to be a close contest. The starting five were Jo Hill, Shannon McKay, Kirsty Williams, Opal Mader and Sarah Elsworthy. Jo opened our scoring and it was a physical, fast game from the start. Kirsty and Sarah were playing strong defence and as the coach yelled instructions, Jo scored, was fouled in the air and made the bonus. Sarah pushed through and then had an offensive foul called for her. West intercepted however, and it took a stylish three by Shannon to get the home crowd excited. Opal was scoring well and Kirsty had effective rebounds. Sophie Byrne and Shannon Tarran stepped onto the court and North were leading by 2 at quarter time, 24 to 22.

Georgia Green and Courtney Hanson left the bench as West were scoring fast. Sarah’s second effort was rewarded with a turnover by West and then Courtney took an offensive charge, standing strong. Georgia was fouled and scored the bonus and then did it again much to the crowd’s delight. Jo was playing hard and then was fouled and scored both foul shots. As the score levelled, Courtney drove hard to the basket but West managed a steal and scored to take the lead. Sarah replied and the West coach called another time out which gave the Rockettes time to dance. West took the lead at half time 40 to 44.

The starting five were back on and Opal scored and Jo took a terrific rebound. Opal followed with another effective rebound and Sarah shot a couple of nice threes. Defensive pressure was strong from West but Jo pushed through and Courtney did a nice layup. West had shot away to a lead of 55 to 63 at three quarter time.

The Rockets restricted West’s scoring with solid defence in the 4th quarter and with Shannon and Jo scoring, and Courtney making a nice steal, the lead was pegged back. Opal received an offensive foul and a Rocket’s time out advanced the play. Man defence was instructed and with West on 5 fouls, the pressure was on. Sarah made 2 which brought them back to within 3 with 2 minutes to go. The team fought hard but went down to West 74 to 76.

Top rebounders were Jo with 12 rebounds

Top scorers were Jo and Sarah both with 21 pts.

See you Saturday night at St Clair where we take on Woodville.