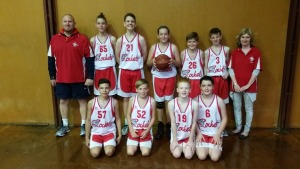 Deb Price's Under 14 boys Division 3 team was nominated by the club to compete in the Junior State Championships to give them some valuable experience against some Division 2 teams.

We were placed into Pool D against 3 other teams, two Division 2 teams Sturt and Eastern Mavericks and one other Division 3 team in Norwood. Our first game had us at Pasadena against Sturt on Friday night and after a shaky start found ourselves 0-6 down in the first 2 minutes of the quarter but to the boys credit they steadied and played our fast free flowing game  and were up by 12 at half time. In a tense second half where the game was played at a frantic pace we held on to win by 6 points.

The boys were ecstatic to beat a Division 2 team who were equal second in the current winter season.

We played two other games on the Saturday from Pool D, the first was against Norwood at Mars and second would be against  Eastern Mavericks at Wayville. The Norwood game was not our best team effort and the boys didn't follow instructions and we found ourselves 20 points down going into the final quarter. The final quarter was our best by far and we outscored Norwood 15-4 and eventually  lost by 9 points in a very physical game. Our final pool game against Eastern Mavericks was a very scrappy affair where we were not able get our free flowing game going but we prevailed to win  by 10points.

At the completion of the pool stage  we found ourselves in second place, our next opponent was to be North Adelaide Division 2 side who finished top in pool C. This game was  played at the Adelaide Arena on  Saturday night and  after a tentative start the boys got there game happening and there was only a couple of points between the two sides at quarter time. The next two quarters the Division 2 side poured on the pressure and with some costly turnovers and poor shot selections from our side the lead blew out as high as 17 points. Deb's team finally got there rhythm going and rallied in the last quarter and eventually lost by 6 points.

Sunday had us playing two more games, one at Hillcrest against Forestville's Division 2 side where we comfortably beat them 70-35 and our final game and 6th for the Championships which was a playoff for 5th spot was a hard fought victory against Sturt Division 3 side at Marion 42-35.

Deb could not be more prouder of the team who finished a creditable 5th out of 13 teams( 10 Division 2 and 3 Division 3 teams) especially as the coach lost her voice by the Saturday and made it difficult to shout out instructions.They competed against 4 Division 2 sides and won three of them and if they didn't win were more than competitive and can hold there heads up high. They did not look out of place playing against them.

Myself and the parents would like to thank Deb for all she does for our boys, giving up her time to coach the boys for this Championship,Carnivals along the way and for the current season. I would also like to thank a great bunch of parents who are second to none for there continued support. There is a never a dull moment when they are around.