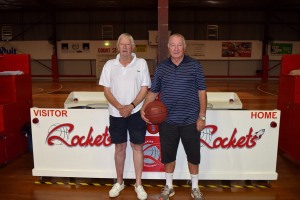 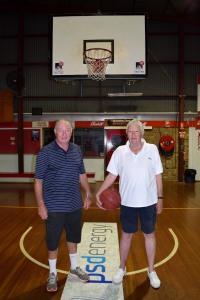 As part of my investigation into the history of the North Adelaide Basketball Club, I had the opportunity today to meet a couple of legends from a bygone era, in Alan Hare and Mike Megins. Both were multiple Club Fairest and Best winners, represented the State for a number of years and were also involved in National programmes.

Alan first represented the Senior Men’s District Team in 1952 as a 16 year old. He played over 300 games, (over some 16 years) and played in 5 District Championships in what can only be described as NABC Men’s Golden Era. He represented the State for the first time in 1953, and did so for the next 10 years. He also went on to play for Australia (the first NABC player to do so) at the Rome Olympics in 1960!!  He won 4 Fairest and Best trophies for North, and won the coveted Woolacott Medal (as the Fairest and Most Brilliant Player in the whole District Competition) in 1957. He also coached the Men’s District team on two separate occasions (1968 to 1972 and 1978 to 1979). Alan also served on the committee for many years, and was awarded Life Membership in 1963.

Mike played District Basketball for over 10 years from the mid 60’s all the way through to 1974. He played well over 200 games, won 4 Club Fairest and Best Trophies (4 years in a row, 1968, 1969, 1970, 1971) and won the coveted Woolacott (as the Fairest and Most Brilliant Player in the whole District Competition) in 1970. Mike represented the State regularly from 1966 and also made an Australian practice squad in 1969, so was certainly a player to be reckoned with. Mike also served on several committees during his tenure.

A couple of absolute characters, (the first thing they did when we got into Hillcrest was dribble the ball and had a shot or two) who enjoyed the opportunity to talk about the history of NABC. They will be helpful in filling in some of the “gaps” in the records and we hope to see them at a game soon.