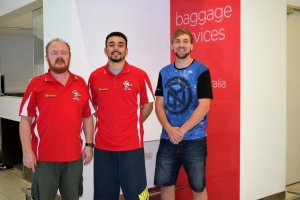 Cody Rhorer, North Adelaide Men’s new premier League import for 2016 has arrived in Adelaide. He hails from Indianapolis, Indiana but played his college basketball at Trinity Christian College in Chicago where during his 3 year stay he was a starting guard, making All Region, All Conference and All American teams in his senior year. He was also 2 times Player of the Week NAIA and 3 times Student Athlete of the Week.

As further testament to his basketball abilities, Cody was selected to play with Athletes in Action, joining them for a summer tour of Israel, where he played against the Palestinian National team and several local clubs, averaging 23 points and 6 Assists per game.

He graduated from College in 2015 with a major in Psychology.

Cody has 3 older brothers and a younger sister, and interestingly one older brother, Courtney Lee, is a starting guard for the Memphis Grizzlies. So if you want to have a chat about the NBA and the Grizzlies in particular, Cody is your man.

A self-confessed “gym rat” who loves to spend time working on his skills, you will see Cody at Hillcrest regularly honing his shot or polishing up on his ball handling. He works hard on his game and is an example to all aspiring players, of what is required to make it to the higher levels. He also has a lot of experience running basketball coaching clinics so if you are looking for some individual skills coaching, with a taste of American College standards, then Cody is your man, and you can book a session via Barb Rowe.

During his stay Cody is looking forward to some warm weather, seeing a Kangaroo and a Koala, and helping the North boys fulfil their potential for 2016!!

If you see Cody around, please take the opportunity to say hello and make him feel welcome at North Adelaide.