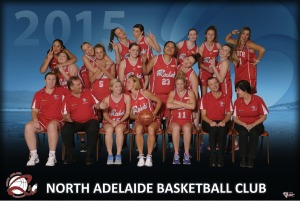 Well the last match of the minor round was a very exciting one. We congratulated Jo Hill on her 251st match which is an outstanding achievement. Well done Jo, you are a North Adelaide Rockets Legend! But that didn’t stop the Sturt Sabres from playing hard against us. With strong, tough defence from both teams, inevitably there were lots of fouls. They lead at the first break, 16 to 21.

The second quarter was a real struggle, but the starting five especially Jo, Kirstie and Shannon all played really well. As the coach and crowd yelled ‘Lift” the team certainly did, both with their foul shots and also their effort. Half time score 39 all.

There was high drama in the second half, with Opal going down with a rolled ankle, the score fluctuating, the Rockettes dancing and the crowd cheering. Finally after gaining the lead in the third quarter, the Rockets ran away with a terrific win of 83 to 69!

We’d like to thank all the volunteers, our families, supporters, the Rockettes and coaching/management staff for all their support, cheering and coaching this year. Looking forward to the finals, so come out and support us at our first home final, Saturday night 8/8 against an in form South. Come and cheer us on as we begin the journey towards “back to back”!