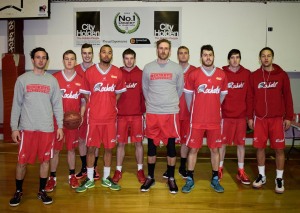 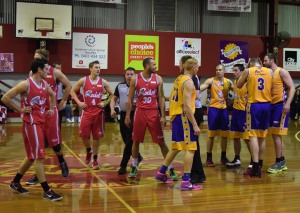 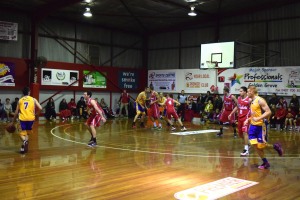 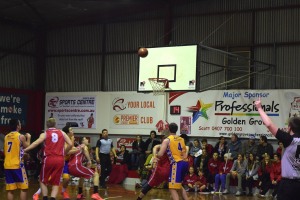 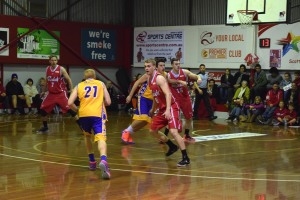 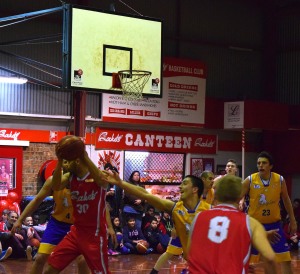 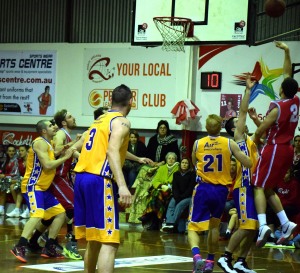 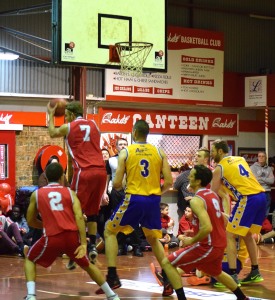 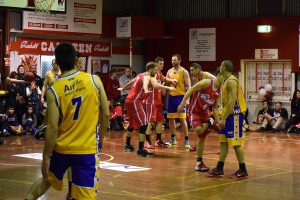 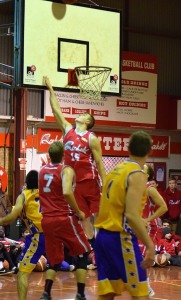 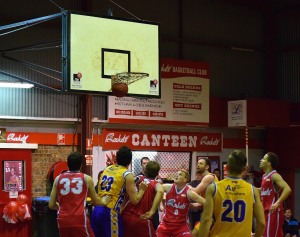 In a game where the premiership points were very important to both teams, the North Adelaide Premier League Men had an amazing second half to outscore Forestville 44-25 and potentially secure their finals spot for 2015.  The game itself may have been dominated on the scoreboard by two players, (Hillcrest favourite Aric Miller with 38 points and 36er Anthony Petrie with 27 for the Eagles), but the “team first ” defensive effort  the Rocket boys displayed for the entire four quarters, was arguably their best of the season and resulted in a well deserved 22 point win, with plenty of highlights for the big crowd.

The game started a little differently, with Coach Hawkes tweaking the starting line up to better match the opposition, and Brett Collins moving to the “1” spot. This worked perfectly with the boys getting off to a great start. It was quickly 11-4 our way, with Aric hitting two big 3’s, and a layup and Brett hitting a 3, but Forestville are a good team with a very experienced line-up and they had no intention of allowing us to control the game. Jake Rios, their main scorer of recent years and a big threat, hit a 3, (his only score for the game) at the 6 minute mark to keep Forestville in touch, and Petrie and Vasiljevic were starting to have an influence on the boards. The margin was 6 in our favour with 1 minute 58 seconds to go, but Forestville went on a 6-0 run and before we knew it the scores were level at 21 all, then up stepped Aric for another 3, and it was 24-21 at the first break. Aric had an amazing start on the scoreboard, despite the physical attention he was receiving, with 14 points (2 rebound and 3 assists) and John had 4 points (2 rebounds and 1 assist) to lead the way statistically. There were a couple of things to work on though, we were outrebounded 8-10, and Leroy had picked up three fouls, reducing his influence (although he had managed 3 rebounds to this point).

The lead built to 6 quickly, when the 2nd quarter started, and hovered around the 4-6 point mark for most of the term but the boys just could not extend it any further, despite playing very well. Some unnecessary fouls allowed Forestville into the “bonus” situation early and this in turn allowed them the opportunity to lead the game at the 4 minute mark on a Petrie free throw. Defensively the boys were playing extremely well, restricting Forestville’s main scorers, (with only Petrie in double figures) and an 8-4 run to finish the quarter saw the margin at 3 at the long break.  Statistically Aric (19 points on 6 of 9 shooting), Lucky (6 points, 2 rebounds and 2 assists), and John (6 points, 5 rebounds,1 assist and 1 block) led the way but the team mentality of the boys was excellent, with everyone playing their role to perfection. Rebounding remained an issue at 15-23, but we led all the other important statistics and everyone felt that if the boys could maintain the defensive effort then good things would happen and so it proved.

The 3rd quarter saw the Rockets outscore the opposition 27 to 14 on some great play at both ends of the floor. They really clamped down defensively, and made it very, very difficult for Forestville to score, whilst getting themselves to the key for some easy baskets. Forestville countered by going to a zone but the team first mentality of the boys really shone, with lots of extra passes for simple scores under the basket. Leroy got back into the game despite his 3 fouls, but quickly picked up his 4th and again had to be subbed out, and Brett Collins picked up his 3rd, requiring some careful consideration of his involvement from the 4 minute mark.  For the quarter the boys shot better than 50% (9 of 19) whilst restricting Forestville to just 33% (6 of 18), which saw the three quarter scoreboard read 66-50. For North, Aric had 35, John 10, Lucky 8, Brett 7, Tom 3, whilst for Forestville, everyone apart from Petrie (20 points) was being very well held.

For North statistically everyone contributed, with Aric’s efforts particularly impressive (38 points, 4 rebounds, 7 assists, 6 steals and a season high efficiency of 52). John had 14 points, 12 rebounds, 2 assists and a block; Brett Collins in one of his best games for the season had 11 points, 4 rebounds, 3 assists and a steal; Lucky had 10 points, 4 rebounds, 4 assists, 2 steals and a block; Pikey had 6 points and 2 rebounds; Tom had 3 points, 2 rebounds, and an assist; Leroy, despite played restricted minutes had 6 rebounds and 2 assists; Adam had 1 point, 2 rebounds, 1 assist and a big block. Having said all that it was (as it often is in these sort of games), a lot of the non-statistical areas that were particularly impressive. Defensive effort was off the scale, communication was excellent (especially in defence), blocking out the rebounding threats, diving on loose balls, being aggressive to the basket etc etc. were exactly what the coaches were looking for and augur well for the upcoming finals series.

A BIG, BIG win for the boys. Next week is a double header, with Norwood on Saturday at Mars, and Centrals on Sunday (5:30pm) at Titanium Security Arena.  Three games to go before finals, get out and see the boys now.