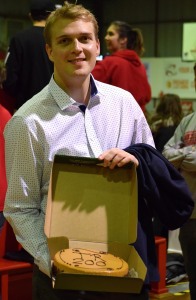 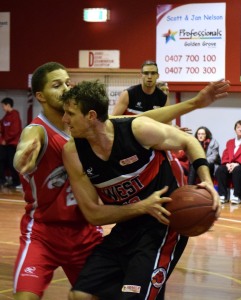 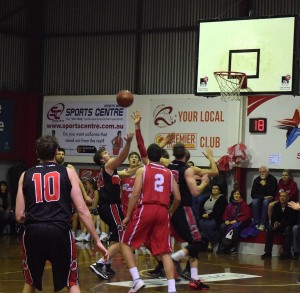 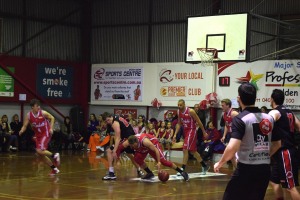 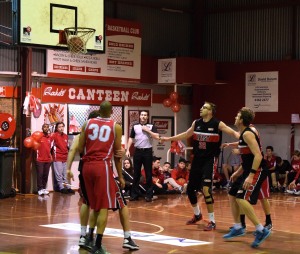 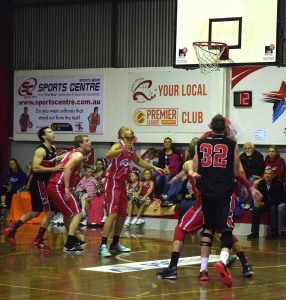 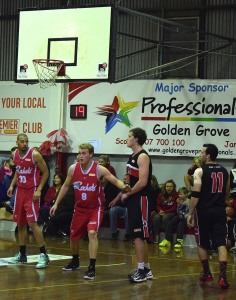 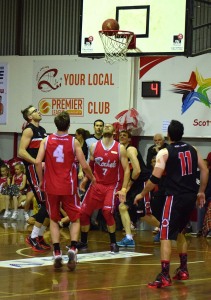 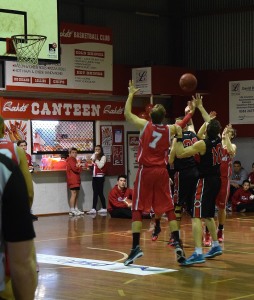 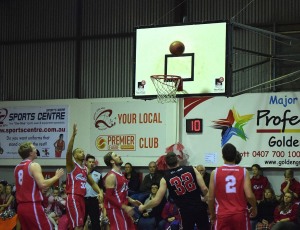 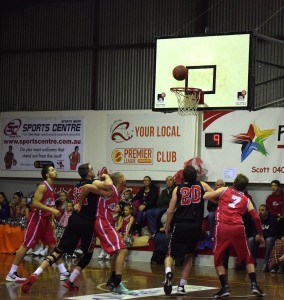 The North Adelaide Men’s Premier League team (better known as the “cardiac kids” given this is the fourth game this season decided in the last few seconds) have done it again, beating West Adelaide, in a very important game in their quest for finals, by a single point on a basket by Brett Collins with 5 seconds left on the clock. In a game where the lead changed 26 times (that’s got to be some sort of record) and was tied 10 times, the result came down to the last offence of the night and the Rocket Boys prevailed to cap off what was a great celebration for Captain Tom Rowe’s 200th Premier League game.

Having lost 4 games in a row and put what was a very secure spot in the finals on the line the boys were keen to put their best foot forward in this game. They had trained well during the week and were looking forward confidently to the opportunity of having another go at Westies who pipped them by 6 points the last time they met (Port Adelaide). They got off to a flier, moving the ball well, running the break, being very aggressive defensively and outscoring West 8-2 within a couple of minutes. In desperation the Bearcats called a time out to try to stop the momentum. John Wernham was already proving difficult to stop with 6 points and a couple of rebounds, and Lucky (a welcome addition after a game out with injury), was all over the court defensively and off to the races on a defensive rebound for a fast break layup.  On the return from the time out Westies settled a little, scoring a couple of baskets, but the North boys continued their aggressive style and on another basket by John and with Aric starting to hit the target, the difference remained at 6 before Coach Hawkes got a few subs in. Adam Schild had an immediate affect with a couple of big defensive rebounds, as did Brett Collins who scored 4 quick points on a big 3 and a free throw. Quarter time scores 26-18, and things were looking good. John had 10 points, 3 rebounds and a couple of blocks in a great start, Aric had 8 points, Lucky and Brett 4 each. Team stats show we were shooting at 60%, outrebounding Westies 11-7 and led the assists 6 to 2.

The second quarter started with a Pikey block and a Leroy basket (making the difference 10 points) then Westies went on a little run getting the difference down to just 1 at the seven minute mark. Now it was North’s turn to call a time out to change the momentum and the response was immediate with baskets to Lucky, Tom and John to again get the lead out to 7.  However on the back of some good basketball by 36er Peter Crawford, David Sturner, and Tristan Braithwaite, Westies suddenly found themselves in front with two minutes to go, and they managed to build the lead to 5 before Aric, Leroy, Pikey and Brett got involved and cut the lead to just 2 at the long break. We still led the rebounds, 22-21, Assists 9 to 5, and blocks 5 to zero, but shooting for the quarter was disappointing (6 of 20), leaving us at 43% for the game, and we had 5 unnecessary turnovers. Anyhow, half time scores were 39-41 and there was a lot of work still to do.

The 3rd quarter was a cracker. Both teams were aggressive at both ends of the floor and were looking to push the ball, which did result in some turnovers, but made for exciting basketball and plenty of scoring. The difference was normally only a basket, as both teams tried various strategies to get an advantage. John  Wernham continued on his big night (up to 24 points by three quarter time), scoring 12 for the quarter and proving to be a big presence on the defensive end with 8 rebounds and 4 blocks !! Aric was also building on a good start with 18 points by the break, along with 5 rebounds, 4 assists, and some excellent defence. Having said that it was a great team effort as everyone did their bit, played their role and showed what they are capable of. At three quarter time the score was 64 all, and the last 10 minutes was going to be very important to both teams season fortunes.

The last quarter was high scoring and very tense. The difference never got to be more than 3, as both squads gave their all.  Teams traded baskets (Aric scored the first 8 points for us, including two big 3 pointers), and it was basically 1 up, 1 down for the first 7 minutes.  Sturner, Crawford and Braithwaite were keeping Westies in it, whilst John, Aric and Lucky were keeping the scoreboard ticking over for us.  A BIG 3 pointer by Lucky put us 1 point up with 26 second to go and potentially the win, but a 5th foul on Aric on the next defensive play, and the subsequent free throws saw Westies 1 up with 14 seconds on the clock and North’s ball. A time out saw the ball advance to the forward court and Coach Hawkes settled the boys down for one last assault. The intention was to keep the ball until the last few seconds, then take what would be the game winning shot (hopefully). The ball ended up in Brett’s experienced hands who took the ball to the hoop and let go what looked to be a perfect layup. Whether it would have gone in or not will never be known as the Westies defensive player tapped it away on its downward flight and the referee rightly called “basket counts”. One up 5 seconds to go and pandemonium in the stadium. Westies threw the ball in and took a long, long 3 pointer which never looked like it, and The North bench, the crowd and the players erupted on the back of an exciting 1 point win !!!!!!

A big night for the team and for the Captain in particular. He would never make it about him, but the boys were ecstatic to win the game for him in his 200th, and going by the number of kids looking for autographs at the end , he remains as popular as ever. Well done Tom and well done team !!!!!! The boys enjoyed a presentation of a team signed photo to Tom and the 200th game memento stubby holders. Looking forward to the next 200 Tom !!

Next game is the long trek to Morphett Vale on Saturday. Another important fixture as we close in on finals participation.